The memorandum entitled "Urban Energies – Future Tasks of the Cities" was drawn up in an extensive consultative and decision-making process and passed at the "Städtische Energien/Urban Energies" international conference in October 2012 in Berlin. It represents a commitment on the part of the participants to implement integrated urban development in their own respective contexts and emphasizes the compelling need for active urban development policy.

The memorandum calls on all active players and those in positions of responsibility in cities, regions, countries and organizations, associations, companies, and initiatives, to assume responsibility for launching programs and projects aimed at sustainable urban development. The goal is to implement alliances for viable cities at all levels. These alliances must be coordinated.

In Germany the National Urban Development Policy assumes this coordinating role. As part of the follow-up process for implementing the memorandum, since early 2014 new, exemplary urban development and business projects have been sponsored as part of the "City and Urbanity" series of projects. A broad range of project sponsors from civil society, business, municipal and regional public authorities are testing new forms of cooperation between cities and business. Furthermore, in consultation with alliance partners from business, the academic community and civil society, further decisions are being made with regard to implementing the memorandum.

Integrated urban development approaches are becoming increasingly important not only in Germany but in other countries as well. Drawn up by the European Union member states, the Leipzig Charter is a document that already constitutes an international agreement. With the initiative having been firmly anchored at national level, the international exchange of experience will also intensified.

The German Federal Ministry of Transport, Building, and Urban Development has already concluded urban development and housing policy cooperation agreements with both the U.S. Department of Housing and Urban Development and the Department of Cooperative Governance and Traditional Affairs of the Republic of South Africa. China, India, and Brazil are other countries, with which Germany has agreed to cooperate closely. In particular this exchange focuses on the challenges cities and regions in different countries are facing, which integrated urban development approaches are being implemented locally, and how to enable successful cooperation. On account of the restructuring of the ministries and the ensuing redistribution of tasks, since 2014 the Federal Ministry for Environment, Nature Conservation, Building, and Nuclear Safety has been implementing the cooperation agreements.

As long ago as late 2012 representatives from various countries started work on the different projects. The "Dialogue for Change" project involves comparing the experiences gained from different municipal development programs in the USA and Germany in which citizens were closely involved, and in initiating learning and exchange activities that relate to all those participating. The "Rejuvenated Cities" project is searching for success factors in the regeneration of cities. To this end case studies are being conducted in selected European cities. 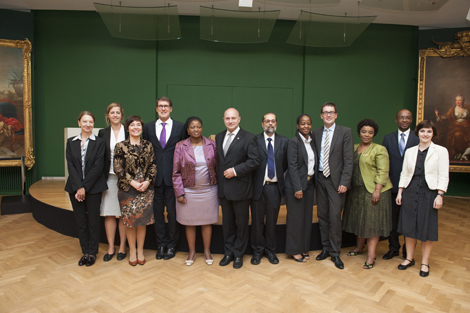 Signing of the cooperation agreement between the German Federal Ministry of Transport, Building, and Urban Development and the Department of Cooperative Governance and Traditional Affairs of the Republic of South Africa in Mannheim on 17th June 2013 Source: Milena Schlösser