Cities, local authorities and regions face a major challenge: to hold their own economically on both the regional and global stages, to master the difficulties of climate change, demographic trends and ensure urban development that is socially just, while also reducing regional disparities. Inclusion in urban development is no longer just a nice buzzword. It must be anchored in local urban policymaking. What people expect of their immediate surroundings is likewise rising. The quality of life in cities and communities is not least a reason for businesses to relocate there.

Local authorities, the federal states and central government are all concerning themselves with these issues. At one and the same time. A major challenge that calls for strong partners and extensive collaboration if the cities and local authorities are to remain viable entities in the future. 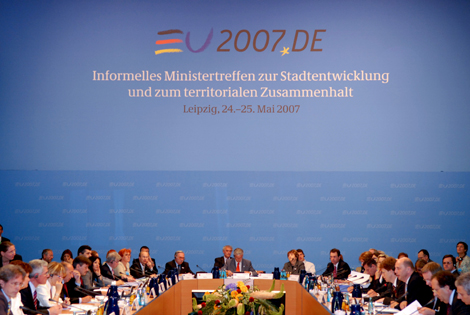 In response to the Leipzig Charter, in July 2007 the Federal German Ministry of Transport, Building and Urban Development began to draft the "National Urban Development Policy – a Joint Initiative of the federal, state and local governments". The National Urban Development Policy is a joint project by the Federal German Ministry for the Environment, Nature Conservation, Building and Nuclear Safety, German Association of Cities, German Association of Towns and Communities and the Conference of Building Ministers and therefore offers anyone with an interest the opportunity to make a contribution to the topics of city and region, living together in the city, urban qualities and good urban planning.

The general public is to be made more aware of the topics affecting cities and towns, new alliances and greater participation are to be encouraged. Citizens are to be more strongly involved. To this end a number of events are on offer, which promote exchange and help find innovative answers. The following will assist in this initiative:

Successful politics relies on protagonists from the worlds of business, science, politics and civilian society becoming involved, contributing their expertise and skills. The National Urban Development Policy offers diverse opportunities for collaborative work on the future of our cities and communities.