Besides advancing legislation (especially urban planning legislation) relevant to specific areas and coordinating research projects on "city and space" (department- and university research) continued subsidization of urban development represents another main focus of "good practice". It was born from the realization that the complex societal, ecological and economic challenges cannot be faced by the cities alone. Owing to their size and complexity many tasks must be addressed by the entire state. This is why ordinarily the federal government, the states and local authorities each contribute one third of financing required. 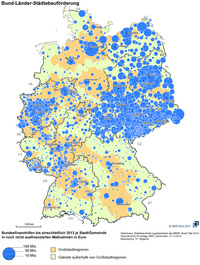 Subsidizing urban development is an important instrument of state structure and urban development promotion programmes. Support is given not to isolated, individual projects but to comprehensive urban planning measures in spatially defined areas. Devising integrated urban development concepts is becoming increasingly important. In many places it is not only people from local administration and politics that are involved at the planning stage but local residents, business people, property owners, initiatives and associations, too. In addition, urban planning promotion programs make an important contribution to the promotion of local economy. More recent studies conclude that urban planning aid from federal and state governments constitutes 7.8 times the amount that comes from private and public investments. Since being introduced for the first time in 1971 the subsidization of urban development has been subject to continuous development.

It reflects the tasks currently facing urban policymakers and comprises the following programmes: