As part of the reclamation of an inner city colliery wasteland, any pollution found (soil pollution) was treated and encapsulated on site. On the cover, a new urban neighbourhood with a large park was created in a high-quality design, which upgrades the new area as well as the neighbouring quarters and simultaneously contributes to the interlinking of open spaces. 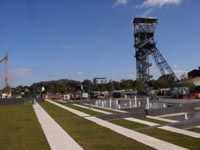 In Alsdorf (pop. approx. 46.000), north of Aachen, a large inner city area (ca. 40 ha) had fallen into disuse following a pit closure. Its reactivation was aimed at upgrading the inner city and adjoining town districts and creating new residential and industrial spaces in a central city location. The overall planning was in particular based on urban development, architectural and ecological quality standards (soil protection, contamination remediation, rain water management, solar energy use, space-saving development, transparent planning process, etc.). Based on an urban design outline plan from 1996 (Pesch and Partner, Herdecke), the “Anna-Park”, the “Anna Park Centre”, social facilities (day- care center, primary school, etc...) and about 180 residential buildings have been realized so far. The designated commercial areas are in the process of being marketed. The landmarked power centre will soon be rebuilt into a cultural and educational centre

In the framework of the EuRegionale 2008, which is a part of the North Rhine-Westphalia State programme “Regionale”, the mining museum is being developed into the “Energeticon”, an adventure museum dedicated to the development of power generation and the history of mining..

The “Anna-Park” measures almost 11 ha and is the central element of the redesigned colliery plot. It was created on the former location of the “Anna” coking plant and its auxiliary facilities and now represents the eponymous and image defining center of an inner city district in Alsdorf.

Proposals concerning the design and townscape integration as well as the management of complex pollution issues and the mining history were assessed in a landscape planning realization competition. The realized design by the winner of the first prize (Ipach & Driesbusch, Neu-Isenburg) specifies an oblong, raised lawn area (7 ha) as a central element on the contaminated subsoil.

The design of the entire park area is intentionally artificial to commemorate the location's history. Two sections at the head ends are interlaced by black stone walls representing coal seams. On the town-facing side, a so-called „water table” characterizes the public space between the park and the town. On the opposite side, closure is provided by a stone square at the historic power plant. The raised park area serves as a cover for the previously heavily polluted soils from the entire colliery area.

To remediate the pollution, contaminated sections were scooped out in stages and the polluted soil was heat-treated on site. The residues were mixed with cohesive ground material, encapsulated with a drainage and sealing system and finally covered with cultivable soil.

Located between a residential area and industrial spaces, the Anna-Park provides a high-quality public open space, reduces the open space deficit of Alsdorf’s inner city and links the residential areas to the green spaces on the former waste heaps via “green fingers”. By virtue of its integration in the overall townscape and a design allowing multiple uses, the park provides a new quality open space for all the city’s residents. 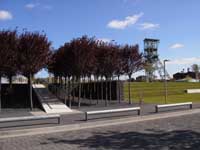 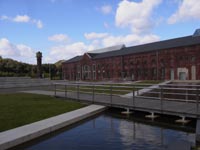 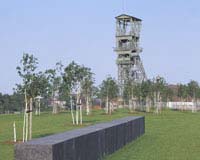 "Anna-Park" is a successful example for the realization of a "public space" for community use. It was possible to turn the restrictions caused by the existing pollution into a potential for the entire site by creating a thoughtfully designed park on the "local contamination landfill". The realization of this solution boosted the image of the new area and significantly improved the open space situation for the entire town.

Record inserted on 17.09.2004 by Lehrstuhl für Planungstheorie und Stadtplanung, RWTH Aachen and updated by the Federal Institute for Research on Building, Urban Affairs and Spatial Development (BBSR) within the Federal Office for Building and Regional Planning (BBR).