A property and location community (ISG) operates the upgrading of the urban neighbourhood known as the "Bermuda3Eck" (Bermuda Triangle). A binding and sustained cooperation has been formed with the ISG structures from casual and case-based forms of cooperation. 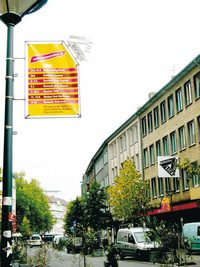 The Bermuda3eck is an "established" shopping and bar district in Bochum (population 383,700). It is characterised by long-term cooperation between the economy and the city and it is characterised, above all, by gastronomy, retail and service providers. 320 companies and freelancers employ a total of 1,500 people. The Bermuda3Eck is a national visitor magnet with approx. 4 million guests a year.

In the past, the development of the district has led to concerns in respect of use, structure and social environment. Various initiatives, such as the Initiativkreis Bermuda3Eck e.V., the Arbeitskreis Bermuda3Eck, the project group "Sicherheit/Ordnung/Sauberkeit" and the project group "Drogen" have triggered various approaches to cooperation and to the targeted development of the neighbourhood and have implemented projects. However, their activities have had limits. As a result of this, the responsible people in the district have come together again within the framework of a property and location community.

In order to stabilise and upgrade the Bermuda3Eck area, land and property owners, businesses, freelancers and public planners have founded a Immobilien- und Standortgemeinschaft (ISG, property and location community).

The Bermuda3Eck ISG is organised as a registered association. Membership is voluntary. The number of ordinary members is currently over 70. The board comprises two property owners and two business owners. A ten-member council supports the project. It advises and makes decisions, together with the board, on important association matters. The council comprises representatives from the Chamber of Trade and Commerce (IHK) in the central Ruhr region, from the retailers' association Einzelhandelsverband Ruhr-Lippe e.V., from the City of Bochum, the state of North-Rhine-Westphalia and from the economy. A project manager and a project coordinator are responsible for implementing the aims and measures.

The cooperation between land and property owners and the city planners is regulated in the form of a development agreement. In this way, public and private stakeholders are tied into a programme for upgrading the neighbourhood. The development agreement represents a binding framework for the responsibility, decision and finance structures of the project. Autonomy and self-determination are the guiding motives of this agreement. The projects being implemented form the core. They are realised by the ISG. These involve needs-based projects in the areas of urban planning/architecture, marketing/communication/events,¬ security, cleanliness and coaching/advice/information.

One tangible measure was the creation of a meeting point in the district as the contact point for all members and visitors, which is known as the "Bermuda Infopoint". Other projects were the street lighting cleaning, the creation of a lay-by, the relocation of a taxi rank and the installation of extra bicycle stands. A planning office was charged with creating a new light and illumination concept.

From 2004 to 2006, the Bermuda3Eck ISG was a model project in the North Rhine Westphalian development programme "Immobilien- und Standortgemeinschaften (ISG)" (Property and Location Communities). For two years, 60% of the financing came from North-Rhine Westphalia. 30 % was generated by membership contributions and 10 % came from the City of Bochum. The ISG also relies on acquiring additional partners and sponsors. After the end of the support, the association finances itself exclusively from membership contributions and sponsorship. 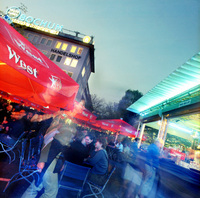 The accommodation quality and attractiveness of the Bermuda3Eck have been increased through urban planning measures and a high quality offer structure. The value of the individual buildings and properties, and the competitiveness of the companies, has also been secured.

In this way, attractive and economic prospects have been facilitated in the neighbourhood for all project participants, in which the concerns of building and property owners do not go against the economic interests of businesses and freelancers.

Record inserted on 29.01.2009 by the Federal Institute for Research on Building, Urban Affairs and Spatial Development (BBSR) within the Federal Office for Building and Regional Planning (BBR).