Bremerhaven-Lehe „Reorganisation of the Schools“

In the Wilhelminian residential neighbourhood of Bremerhaven-Lehe, sustained falls in the population and, in particular, the fall in birth rates, have led to the primary schools being under-used. Within the framework of an extensive school development plan, the primary schools were reorganised, which allowed a school building to be pulled down and the space to be used as a neighbourhood square. At the same time, another school location was structurally and pedagogically upgraded and another was converted into a social-cultural centre.

Because of an economic structural crisis, the City of Bremerhaven (pop. 116,000) has experienced sustained falls in population, which in the last ten years has totalled more than 10%. The falls in population have been concentrated in large housing estates on the urban fringe and in the Wilhelminan neighbourhoods, including the district of Lehe. The district has almost 7,400 inhabitants, is characterised by Wilhelminan perimeter block developments and has the highest density of buildings of all Bremerhaven districts. It has the highest proportion of unemployed people and recipients of transfer benefit in Bremerhaven, as well as a considerable concentration of migrants. The vacancy rate has increased to more than 16 %. Despite inner-city redevelopment measures and current activities in the URBAN II assistance programme, the owners of the buildings are not prepared to make investments. In view of this, the Bremerhaven regeneration strategy concentrated on enhancing the open space situation and the social infrastructure. 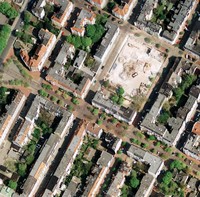 The Theodor-Storm-Schule had to be closed. It has become a "Haus der Familie, Arbeit und Kultur" (Family, Work and Cultural House), which houses social organisations, and cultural artists and small companies. The Zwingli-Schule site was also developed. Since the late 1980s, the Zwingli-Schule has been split between two sites, "Zwingli 1" and "Zwingli 2". "Zwingli 1" had a massive structural and spatial-functional deficit and the regeneration work was classed as "no longer reasonable". The room structure of the "Zwingli-2" building was more suitable for continued use as a school. A renovation of the school building was therefore deemed to be sensible, and was undertaken.

The concentration of the Zwingli-Schule school site on the land made a significant contribution to the qualification of the Lehe school site. The Zwinglischule (primary school) and the adjacent school at the Leher Markt (comprehensive school) both became all-day schools in the 2006/07 school year. Kitchen and canteen, for example, are now operated in a public school association. A dividing road was removed and the two school playgrounds merged in a new design. The offer here has been expanded and there are also public afternoon and school holiday programmes at the two schools. The socio-cultural work for the urban district is being further developed together as a result of the geographical merger. 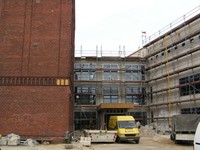 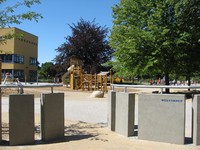 The reorganisation of the schools as part of the urban regeneration of a Wilhelminan residential neighbourhood that is characterised by a fall in population and a decreasing birth rate is a successful local strategy for upgrading a residential area. The measures resulted in varied gains in quality for the neighbourhood. By demolishing a school building an attractive neighbourhood square was created, and by converting and extending other school buildings, room for improved school offers and a socio-cultural centre was created. These measures contribute to the improvement in the housing quality of the neighbourhood and this to keeping inhabitants and gaining new ones.

Record inserted on 20.07.2009 by the Federal Institute for Research on Building, Urban Affairs and Spatial Development (BBSR) within the Federal Office for Building and Regional Planning (BBR).