Urban development is understood in Dessau as a process for the public. The commitment of the public is one of the most important engines in urban redevelopment. The individual adoption of parcelled open spaces is part of this local strategy for new urban landscape which the citizens design and look after independently. As a result, citizen responsibility for urban development is activated and the city gains new types of open spaces as well. 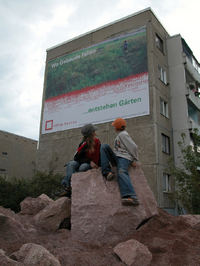 Dessau (pop. approx. 77,000) has lost more than 20 percent of its population. The associated extensive vacancies and wasteland could no longer be treated adequately with the previous planning and traditional ideas. In view of a forecast reduction in the population by almost 50 percent, the concept aims to stabilise the urban city core and gradually create a 90-hectare landscape on the free spaces . "Stadtinseln – urbane Kerne und landschaftliche Zonen" (City islands - urban cores and landscaped zones) is the strategic answer from the city of Dessau-Rosslau. The visionary concept of "city islands" has its concrete form in the project "400 m² Dessau". With this, a new, flexible and dynamic strategy has been devised with many stakeholders and methods. 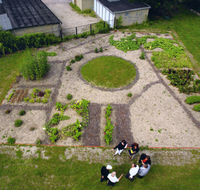 With the "400 m² Dessau" concept, the city is relying on designing the urban restructuring "with and by citizens". Residents, supporters of cultural institutions, initiatives and societies can assume responsibility for individual spaces ¬(claims) in the landscape and design them according to their own ideas. The landscape modules follow a uniform grid of 20 x 20 metres and, despite the temporal and geographical uncertainty, manufacture a basic design and structural requirement. The claims are included in a path system, the "red thread", which will open up the growing landscape area. Red metal pennants mark the path and provide information about the respective projects. The claims have red wooden fencing in common, along with a surrounding gravel band.

The areas are provided to the stakeholders for free. Use agreements regulate the designs and the maintenance. Each project is given individual initial resources (construction material, water connection, etc.). In this way, a "Chemist's ¬garden" has been created with herbs, the society "Energietisch Dessau" is experimenting with energy plants, the Dessau multi-cultural centre manages a claim as a garden of meeting.

Together with the public, the idea of future landscapes has been developed. The large difference from ¬traditional parks lies in the permanent change of the new urban landscape in the sense of a learning process. The city gains an entirely new type of open space, which is not preprogrammed according to use and function, but which gets is character only from the general process of cultural acceptance by the stakeholders and the type of management. The landscape becomes a direct living space and a living shop-front for the city.

The necessary space management is performed through the multi-agency ¬coordination office City Redevelopment, which meets once a month and is currently coordinating the imminent work steps. An important working group is Flächenmanagement (Space Management) under the management of the survey office. The Bauhaus Dessau foundation contributes its technical competence in the areas of aesthetics and communication. The contact point Urban Restructuring of Agenda 21 is a joint institution of both institutions and coordinates the work between the public and the local authority.

The landscape is represented in the space use plan with a new space category "Spaces with large green areas and low solitary development". This is not included in the planning design order, but guarantees a high level of flexibility for the implementation of the concept. At an informal level, the guideline "Landschaftszug Dessau-Roßlau – Handlungs- und Gestaltungsvereinbarungen" supports the process-orientated planning of the landscape. With the conclusion of the use agreements between stakeholders and the city, the development can be directly controlled. Informal "rules" add to the contracts and regulate the marginal conditions. Each individual case is negotiated anew, and the duties required of the partners are adjusted to their possibilities. Societies have to assume the liability for premises, for example, whereas the city supports individual persons.

The city is striving to purchase properties for redevelopment. On a pilot basis, a market value of € 1.30/m² has been calculated for a sample property in the landscape area for the use being planned. If offers do not lead to this goal, the city will try to secure its design ideas through long-term licence contracts (15 years) with the owner. The costs of approx Euro 3,000 to 4,000 for creating the claim are currently financed with urban restructuring funds from the Upgrading programme. The use of agricultural plant is envisaged for one-year's mowing of the extensive meadows. The costs incurred for this are estimated to be Euro 0,03 /m². The basis for the maintenance is formed by a maintenance and development scheme. The maintenance pictures and chronological ¬matrix show and illustrate certain maintenance forms.

New types of open spaces are established as public places under individual responsibility. The brand "400 m²" gives a positive vision of the urban development backdrop, which motivates the residents and social stakeholders to take on the responsibility for the public area and for the neighbourhood. As a result, innovative forms of use are promoted, new landscapes are generated and at the same time the public identification and the integration of various social groups are enhanced. The individual steps for implementing the claims and the landscape area are integrated into various overall strategies (urban development, open space concept, neighbourhood development).

Record inserted on 25.06.2009 by the Federal Institute for Research on Building, Urban Affairs and Spatial Development (BBSR) within the Federal Office for Building and Regional Planning (BBR).