Thanks to citizen involvement , a listed building threatened with collapse was renovated and impetus was given to the upgrading of inner-city locations. A spontaneous, public campaign against the demolition developed into the organisation "Verein Schwabehaus e.V.", which ultimately became the supporter of the rescue campaign. As a result of the campaign "Bürger bürgen für das Schwabehaus" (Citizens for the Schwabehaus), the redevelopment was achieved by means of individual guarantees for a bank loan, payments from members of the organisation and with funds and material and financial donations from local craftsmen.

Destructions during World War II, decades of neglect of the remaining buildings during the GDR period and the demographic and economic consequences of German Reunification led to considerable structural weaknesses and deficits in the attractiveness of the inner-city. A central aim of the urban regeneration in Dessau-Rosslau (pop. 77,000) therefore is to strengthen the inner-city and to restore it to a central benchmark for the surrounding urban districts. The challenges in Dessau are representative of all cities which have lost a considerable proportion of their population. Since German Reunification, Dessau has had a population of 100,000. This number has fallen by more than 20 percent despite the merger with the neighbouring community of Rosslau. Because of this, local policy has been to follow a long-term strategy from out to in. While buildings on the urban fringe are demolished and new urban structures such as open spaces and green areas are created, the inner-city locations are given particular attention and are upgraded. The local authorities are also reliant on the commitment of the people of Dessau for the realisation of the plans to revitalise the inner-city. 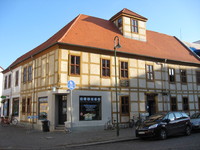 The redevelopment of the Schwabehaus is an example of the upgrading of historic buildings in the inner-city. The listed building is one of the last Dessau half-timbered houses from the first half of the 19th century. By the end of the 1990s it was threatening to collapse after years of neglect. Upon request from the former owner, the Dessau council initially agreed to the demolition of the building in 1998. Subsequently, several citizens of Dessau spontaneously founded the campaign "Sonnenflecken" (Sunlight) from the protest in order to develop a rescue strategy for the building in the two-month period granted to them by the council. The Verein Schwabehaus e.V. organisation developed from this protest.

Obtaining a bank loan to purchase and redevelop the building was a particular challenge as the charitable organisation did not have any of its own assets or collateral. With support from GSL Gemeinschaftsbank e.G., therefore, a special financing instrument was used: the guarantee required was distributed among many individuals. Through a campaign initiated by the organisation "Bürger bürgen für das Schwabehaus", 78 people were found who were prepared to provide individual guarantees from approx. EUR 250 to approx. EUR 2,500. In addition to the GLS loan, the redevelopment of the Schwabehaus was also supported with other funding instruments: through support from the Bundesagentur für Arbeit (Federal Employment Office) (as a job-creation scheme), lottery funding and funding from the Federal State of Saxony-Anhalt and the City of Dessau. Considerable support was also received from members of the organisation for the redevelopment, as well as material and financial donations from local craftsmen and involved citizens.

Around EUR 160,000 had to be raised to purchase the building, and a total of EUR 1.1 million was spent on the redevelopment. Roughly 25 % of all costs were covered by the organisation and 75 % of the costs were acquired as subsidies. The application for and settlement of funding was performed by the organisation as part of its voluntary work. The members of the Schwabehaus e.V. are now the owners of the building. Apart from the two commercial units previously in the building, the existing rooms are now let to clubs at favourable conditions. All rental income is used to repay the loans and as a reserve for any necessary maintenance.

Meanwhile, the Schwabehaus has established itself as a lively cultural centre for the urban district. Apart from smaller events in the club room and the building's courtyard (e.g. summer cinema, lectures), the building also offers the opportunity to find out about the history of Dessau and about the former owner and namesake of the building, Samuel Heinrich Schwabe. The rescue of the building, which was due for redevelopment and at risk of collapse, has led to a new atmosphere in the surrounding area. 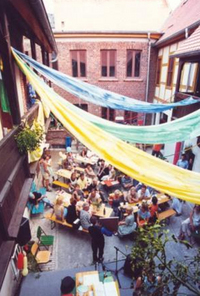 The Verein Schwabehaus e.V., which is supported by local citizens, has succeeded in preventing a demolition that had already been approved by having committed citizens deal with the financial and structural challenges of a redevelopment of the Schwabehaus with support from an innovative loan model from the GSL-Bank. By grouping together individual guarantees from the people of Dessau ("Dessauer Bürger bürgen für das Schwabehaus"), the organisation was able to obtain the necessary loan to purchase the building, the half-timbered building that is a feature of the city and that was threatening to collapse, and to give it a new life as a publicly accessible building.

Encouraged by the positive experience with the Schwabehaus, the organisation is now increasingly working on restoring other listed buildings in Dessau, such as the "Alte Bäckerei", which is situated directly next to the Schwabehaus. The success of the project has also led to many other initiatives, especially in Eastern Germany, for similar campaigns, many of which have already had a useful exchange of information with the Verein Schwabehaus e.V.

Record inserted on 13.07.2009 by the Federal Institute for Research on Building, Urban Affairs and Spatial Development (BBSR) within the Federal Office for Building and Regional Planning (BBR).