As a consequence of vacant shop and residential buildings in the inner city, Eschwege has struck a new path in coping with the demographic and structural change. Under the motto “Eschwege striking a new path” an open process fostering an integrated urban development has been launched. Many inner-city stakeholders were involved in launching the upgrading of inner-city blocks or areas. 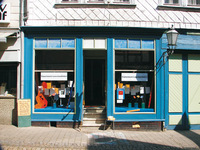 Demographic change and its impacts have taken effect in Eschwege (20,000 inhabitants) more quickly and with more consequences than expected. The attractiveness of the inner city with its historical half-timbered building stock was endangered because of the decreasing number of customers and the increasing vacancy of residential and shop buildings. Building density and the small-space structure of the inner city required new ideas, ways and cooperations. This is why in 2005 the City of Eschwege provided its contribution to the Hessian inner city initiative “Ab in die Mitte” (Off to the city centre) with the motto "Eschwege auf neuen Wegen" (Eschwege striking a new path). The goal was to sustainably revitalise and stabilise the inner city by advancing it in terms of architecture and quality.

In the context of an open urban development porcess, the City of Eschwege launched a competition to form so-called inner-city blocks. House owners, shop owners, restaurant proprietors, investors and citizens were invited to form new cooperations within self-defined inner-city blocks. As an example, concrete measures for new land uses and structural alteration works in vacant shop and residential buildings were developed and illustrated by pictures. Furthermore, revitalising inner courtyards as spatial potentials relevant for inner-cities was made subject of discussion. The contributions to the competition were required to help improve the situation of the blocks sustainably, to help improve the mix of sectors and the supply of goods in the inner city and to help upgrade the public space in architectural and qualitative terms. The concepts had to be more than pure idea collections and include concrete measures and financial schemes customary in banking. A pool of ideas was built up providing models for further inner-city stakeholders.

The project was developed and executed under the overall control of the department of business development of the City Council of Eschwege. The cooperation partners included the structural engineering department of the City Council of Eschwege, the local house and land owner’s association, the local hotel and restaurant federation, the regional retailers association as well as architects. The City Council’s department of business development and a project team support the groups participating in the competition through moderation and specific advice. Altogether 17 contributions were submitted of which 15 were involved in the competition. The manifold topics of the projects implied "multi-generational housing for the elderly", the idea of a "light lounge" as well as the concept of an “inner-city arena”.

All contributions to the competition were presented to the public in the inner courtyard of the town hall of Eschwege. The exhibition met with large response and caused intensive discussions concerning the inner-city development among citizens. A jury finally honoured five contributions as “best concept”. The whole process of forming inner-city blocks was supported by cultural and art projects providing the competition with a communicative framework. Under the motto "Kunstideen in Innenhöfen, Geschäften und Leerständen" (Ideas for arts in inner courtyards, shops and vacancies), artists dealt with the inner city and created an “art trail”.

As a consequence, a privately financed project and a project funded under the urban restructuring funding programme were realised. Further measures are planned. In connection with the blocks, the so-called “Stadt-Galerie” (city gallery) was also created in Eschwege providing about 3,500 sqm of floor area to retailers and service providers in the inner city. In the meantime, the construction work for the market place block and the project “Barrier-free housing at Obermarkt" has also started. The successful reactivation of a former department store property in November 2010 launched the revitalisation activities for the so-called “Hertie-Karree” (Hertie block). Other projects in the inner city will in future be realised with the new programme “Das Eschwege Programm | Innenstadt“ (The Eschwege inner-city programme). 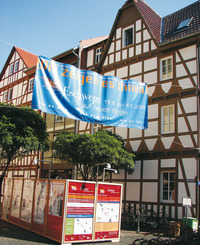 The project especially addresses persons and parties affected by shop and housing vacancies, particularly house owners and shopkeepers. It leads to concrete propposals for sustainably improving local situations and also the inner-city development.

The competition has led to a stronger commitment of local stakeholders focusing on the block as a manageable scale of action. Launching the architectural redevelopment of the inner city creates a higher degree of concretely binding character leading to real changes and promoting the development of the existing stock of buildings.

It also should be mentioned that various stakeholders are activated by additional actions. They work together on ideas and measures to realise long-term objectives. The idea to use inner-city blocks as a strategical instrument represents a new approach to call local stakeholders to account for their locations.

In the meantime, the “block idea” has become established and will be gradually realised. It is additionally supported by other funding programmes and projects in the field of inner-city development.

Record inserted on 07.10.2009 by the Federal Institute for Research on Building, Urban Affairs and Spatial Development (BBSR) within the Federal Office for Building and Regional Planning (BBR).