In the last few decades, Essen has developed from an industrial city into a modern metropolis. Under the motto "Open space creates urban space", the city is now using its open space potential in order to turn urban districts and economic locations into green areas, to develop "Water in the city" as a design element and to connect the city with the region in terms of the landscape.

The steel giant ThyssenKrupp at the historic location of the Krupp Belt is a partner of this green structural change and is making an active contribution to the creation of the Krupp Park close to its new headquarters.

Since the mid-19th century, the history of the city of Essen has been closely linked with the name Krupp. The Krupp cast steel works had a critical impact on the settlement development of Essen in the past. The production plants and works that grew over the decades formed the so-called Krupp Belt, a 230 -hectare area in the western neighbourhood of the city, between Altendorf and the Innenstadt. The company ThyssenKrupp is currently building its new headquarters on this site, which between 1945 and 2007 was largely a wasteland. The globally active steel company ThyssenKrupp is therefore returning to its historic roots and is becoming an important partner in the city of Essen's structural change (pop. 582,000). This partnership gave a forceful push for the development of the Krupp Belt. Among other things, it facilitated the realisation of the Krupp Park, which is also the core element of a superior urban open space concept.

Where the chimneys of the steel plant once smoked, the city is now creating a 23-hectare Krupp Park, one of the central elements in the 230-hectare development area, the Krupp Belt. The area, which was not useable by the public for almost 200 years, will open up to the city and the surrounding urban districts. Its restoration as an urban space for living, the economy, culture and relaxation is one of the most important urban development projects already underway in Essen. At the same time, a new type of urban district is being created with the planned ThyssenKrupp headquarters. The combining element between the Krupp Park and the ThyssenKrupp headquarters is the newly created Berthold-Beitz-Boulevard.

The special feature of the Krupp Park is its superior integration and origin. The landscape vision "Open space creates urban space", in which the Krupp Park represents a component, is an extensive, strategic approach which aims gradually to create new urban landscape structures and to generate varied qualities of the location for different urban uses. Together with KLA, Kipar Landscape Architects, the city has developed an overall urban concept for linking and developing the green and open space structures in Essen. The existing inner-city bodies of water are used as ideal guidelines (rays). Open spaces are to be created along these rays. Their connection to the environment and their thematic appearance should move the planning process into the public awareness. The revitalisation of the Krupp Belt with the Krupp Park is embedded into this superior "rays" concept. The Krupp Park, for which KLA also designed the landscape plan, is characterised here as a landscape-designed, diversified link between Altendorf and the city centre. It is both an attractive leisure and varied business meeting place. A pulsating destination is being created here for young and old.

In addition to the landscape designs and concepts, the inner-city structural guideline of the inner-city general plan passed by the city council in 2001 is in the Krupp Belt. The need for an agreed, overall inner-city concept for the gradual implementation was the incentive for the city and for ThyssenKrupp to work out the general plan together. This collaboration not only shows the broad range of topics in the cooperation. Urban Renewal, Grün und Gruga Essen, Press and Communication Office, Environmental Office, Civil Engineering Office, Essener Arbeit und Beschäftigungsgesellschaft, Agentur für Arbeit, housing companies, economic support, the University of Duisburg-Essen, Altendorf Urban District Office were all involved.

In August 2009, the around 12-hectare area in the north of the Krupp Park was opened with a park celebration. Its design was sensitive to the natural surroundings. There is a high density of trees, fields and clearings, as well as a roughly nine-hectare lake, which is up to 2.80 metres deep and which is fed exclusively from rain water from the Thyssen-Krupp neighbourhod. A hilly landscape has been created from the excavations for the Berthold-Beitz-Boulevard. The highest hill rises roughly 12 metres from the ground. Play areas, a beach volleyball court and other ball-game pitches have been created, as well as a meadow for sun-bathing. Children from local schools helped to deisgn the so-called forest play area. There is a stage on the lake. The national bicyclye path passes by here along the "Rheinische Bahn" path, connecting the park to the path network in the Ruhrgebiet area. Another 11-hectares will be added to the southern part of the Krupp Park. Through the 23-hectare park that will be created in the future from the northern and southern parts, to the west of the Berthold-Beitz-Boulevard, will be one of the largest inner-city relaxation areas in Essen.

The realisation of the Krupp Park aroused local interest. Stakeholders formed the "Krupp Belt Working Group" and have already triggered a series of accompanying measures and projects. The project "Heimatgefühle" (Home Feeling) is an offer from various stakeholders, from schools and the university to associations,business people, and the media, which helps to design the newly created urban neighbourhood and to fill it with life. In a large planting action, more than 100 people planted the first 1,000 trees in the Krupp Park.

Job creation measures are an integral element of the concept which was devised in cooperation between the Agentur für Arbeit, trade and crafts associations and Grün und Gruga Essen. In order to achieve job-creation effects with the redevelopment and design measures, specific qualification measures are supported with assistance from the city's social budget.

Essen informs the public extensively of the changes in their city and encourages the people to join in. For 66 weeks, visitors were able to find out about the Krupp Belt from a local Infopoint, as well as watch the construction work and participate in more than 200 construction site tours. With the opening of the northern part of the Krupp Park, this intensive information work is being continued by the Altendorf meeting point in the urban district office. In this way, visitors to the construction site are able to examine the progress of the work on the ThyssenKrupp Headquarters and adjacent projects along the colourful, 200-metre long fence, which should be completed in stages from 2010 .

The redevelopment of the enture Krupp Belt has been possible only as a result of the cooperation between private and public funding and investors. ThyssenKrupp is the main investor and developer of the headquarters. With support from the federal government and from North-Rhine Westphalia, the city of Essen is strengthening the infrastructural development by building the Berthold-Beitz-Boulevard. The Krupp Park is also supported with city funding, with funds from North-Rhine Westphalia and from the federal government. The city utilities companies and the Emschergenossenschaft cooperative are also providing funding. The foundation "Lebendige Stadt" (Living City) has facilitated comprehensive tree plantings with a generous donation. 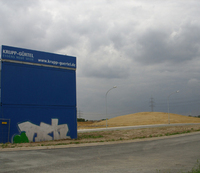 The feature of the Krupp Park is its superior integration and origin. The landscape vision "Open space creates urban space", in which the Krupp Park represents a component, is an extensive, strategic approach which aims gradually to create new urban landscape structures and to generate varied qualities of the location.

The public-private partnership anchored in the project as a successful cooperation form can become strategically important for the landscape-orientated urban development. The conscious link between the site, green space and employment policies also has to be emphasised.

As a result of the varied and offensive communication strategy, there was success in involving relevant supports of the city community in the urban regeneration programme and in assigning responsibility to them.

Record inserted on 04.09.2009 by the Federal Institute for Research on Building, Urban Affairs and Spatial Development (BBSR) within the Federal Office for Building and Regional Planning (BBR).