A functionally, socially and architecturally varied urban district is created on a former “AEG Kanis Werke” plant site. The district concept is based on a percentage specification for use types.

Following an “AEG Kanis” plant relocation in 1988, an opportunity was created in Essen (today’s pop. 574.000) to use the industrial fallow land for a complete rearrangement of the site measuring approximately 10,8 ha. The area, which lies west of and in direct vicinity to Essen’s inner city, had formerly been used as a steel plant by Krupp and after the war by AEG Kanis for the manufacture of gas turbines.

Specific requirements were tied to the development of the industrial wasteland right from the start. The area is situated in a district beset by several disadvantages. These include an insufficient transport connection to Essen inner city and various town planning defects. What these difficult basic conditions called for most of all was a thought-out marketing strategy.

The project was funded and evaluated as a model project within the research field “Mixed Use in Urban Planning” which is a part of the federal research programme “Experimental Housing and Urban Development” between 1996 and 1999.

Starting in 1995, a high-quality urban district is being developed on the former industrial wasteland by mixing various uses. The project has been planned for approximately 600 – 1.000 residents and approximately 2.700 jobs. The 18 plots (building blocks) have been sold and ten of them have already been developed conclusively. 1.370 new jobs have been created at the time of writing. The entire development is based on a concept which was elaborated in an interdisciplinary fashion at the start of the planning process and formulates urban development as well as use-related objectives. This concept became an integral part of the purchase agreement between the council and the NRW state property development company “Landesentwicklungsgesellschaft Nordrhein-Westfalen GmbH (LEG)” who, as the site owner, simultaneously took on the responsibility for the development and marketing of the site. As part of a cooperation agreement, the LEG was supported by the Essen economic development agency “Essener Wirtschaftsförderungsgesellschaft mbH (EWG)”, who in particular organized the coordination with the council. Whereas the council in turn was responsible for the realization of legal planning and permit requirements.

The planning objectives were openly discussed in a lengthy process aiming for consensus. The ultimate result of numerous workshops and expert committees: an inner city-related mixture of high-quality uses was to be realized on the wasteland. In 1994, the planning discussion resulted in a use concept that defined the proportions for individual uses as percentages and simultaneously provided specifications for an urban design competition.

The mixture in Essen’s inner city comprises functional, structural and social aspects. On a functional level, the mixture consists of housing, work, leisure and utility. Structurally, a juxtaposition of various buildings, building types and various forms of architecture is aimed for. The social mixture finally embraces various household types and lifestyles. Two rings of building blocks are grouped around a central, green square. Immediately adjoining the square, the plan mainly specifies residential and leisure uses, whereas industrial uses connect on from there. For the overall construction site, a use mix of 23% housing, 31% industry, 15% administration/services, 8% trade, 15% leisure and 8% hotel was planned. The way it looks today, the industrial uses have mostly been replaced by administration and services.

The prelude to the district development was provided by the musical theatre COLOSSEUM in the listed former “VIII. Mechanical Workshop of Friedr. Krupp Werke” building. The imposing 1900 brick hall was converted in a listing-compliant manner from May 1995 to December 1996 and now provides the new district with an unmistakeable entrée. The second key project on the site was the green square around which the inner construction ring featuring offices, housing and the hotel is grouped. Having been completed very early on, it earned the new district a lot of sympathy from potential investors and future users.

Impulse projects of this type drive area development and hence the marketing of the entire site. 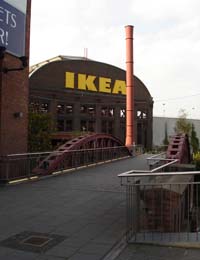 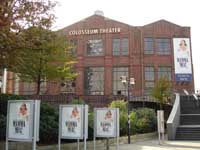 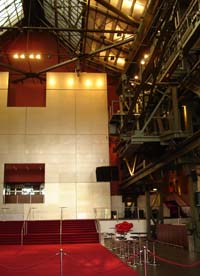 The foundation for the project’s rapid realization was laid by an intensive cooperation in a private-public partnership between LEG and Essen council, represented by EWG. The council enjoyed the benefit of a rapid site development, whereas the LEG profited from the rapid provision of legal planning requirements pertaining to the sale of the plots. Another aspect promoting success is the effective project management provided by a small local team composed of LEG and EWG representatives vested with full decision-making powers. This constellation facilitates short decision paths.

The site marketing was focused on key projects, which were of great significance for the revitalization of the industrial wasteland and served as a motor for the area development. The marketing strategy lends the district an “adventure city” image.

Record inserted on 30.11.2004 by the Federal Institute for Research on Building, Urban Affairs and Spatial Development (BBSR) within the Federal Office for Building and Regional Planning (BBR).