A new residential district is being created in the direct periphery of Fürth’s inner city on a former barracks site. A generously equipped city park was also established on the site measuring aproximately 42 ha. The existing building stock was largely preserved and converted. New constructions were used for gentle augmentation.

The barrack buildings were erected in the southern parts of Fürth (pop. now 111.500) for the Royal Bavarian Army in 1890. Following the Second World War, the US army took over the military base, renaming it “W. O. Darby Barracks”. Once the US army had decided to withdraw its forces in 1995, an area of approximately 42 ha became available to the council for new developments.

A new urban residential quarter for 3,500 residents is to be created on a former army barracks site in a central location. Approximately 1,100 new residential units have been created so far.

The core element of the outline plan, which resulted from an urban design ideas competition held as early as 1996, is a "city park" covering an area of approximately 10 hectare. A large lawn, which can be used by residents for a variety of activities, is bordered by an avenue lined by three rows of lime-trees.

At the edge of the southern city park is the “Green Hall” – the former sports hall of the barracks– which has been converted into a market hall or, respectively, a concert and event venue. The facility is completed by a catering operation with park-access and supplementary amenities (for example a music school).

A key aspect of the urban development outline plan was the change of use of 40 listed barrack buildings. A varied mixture of housing styles catering to a wide range of requirements has been created inside these former troop accommodation buildings. A good example is the barracks complex’ massive head building (210 m long with six floors), where high-quality owner-occupier and penthouse apartments were realized. Besides the sports hall, other functional buildings existing on the site also found new residents, for example the former chapel.

At the urban district park, the first and largest part of the second construction section of housing estates funded under the Bavarian Ministry of the Interior’s programme “Settlement Models” has been completed. 120 of the 200 planned residential units have been created so far, in line with cost-saving and ecological perspectives. They provide affordable and high-quality housing in the direct neighbourhood of the park. The refurbishment measures of old buildings are nearly finished. Only a small number of areas for the construction of new buildings is still available, altogether 93% of the building plots have already been sold (as per May 2009). 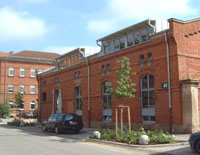 In the Fürth district of „Südstadt“, the change of use of a former barracks site resulted in a high-quality residential quarter with historical ambiance. This was particularly achieved by concentrating green spaces in a single public park and integrating the 40 listed buildings, which now accommodate a wide range of new uses. The establishment of infrastructure facilities – such as the “Green Hall” or the music school – makes the new district a valuable asset for the entire city of Fürth.

Record inserted on 01.07.2004 by Lehrstuhl für Planungstheorie und Stadtplanung, RWTH Aachen and updated by theFederal Institute for Research on Building, Urban Affairs and Spatial Development (BBSR) within the Federal Office for Building and Regional Planning (BBR).