The residential inner-city area of Glaucha reveals both architectural and social problems. One important approach of the City of Halle to solve the problems was to activate private small property owners to participate in urban restructuring. This is why a moderator for property owners was won over to inform about refurbishment and financing opportunities in Halle-Glaucha. 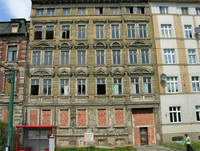 Since 1990, the City of Halle (today 234,000 inhabitants) has lost approx. 80,000 inhabitants due to migration and birth decline, which has resulted in a housing vacancy of around 20%. More than 30,000 housing units with nearly equal proportions of old and new housing were affected. In the meantime, the vacancy has decreased to about 20,000 housing units as 12,000 units were demolished. But in some Wilheminian-style neighbourhoods of the inner city, the housing vacancy is still very high.

The Wilheminian-style working-class area of Glaucha in the southern inner city of Halle is a special problem area. As refurbishment activities had been lagging behind for years, Glaucha was characterised by decayed buildings and bleak streetscapes. In the course of time, these problems were aggravated by social problems and a bad image. The vacancy rates, especially in numerous simple and unrefurbished Wilhelminian-style buildings, reached over 30%. Furthermore, the periphery of the area is mostly isolated from the remaining inner city due to strongly frequented roads and a loss of the urban boundaries. Nevertheless, upgrading measures are also conducted, which are visible: a large nursing and hospital complex are altered and expanded, the historical school town (Francke Foundations) is redeveloped and a new high school established.

The City of Halle has developed a multi-stage model project in order to cope with both the contructional and social challenges in Glaucha. A basis and guideline for implementing the various projects is provided by a social and urban space-oriented neighbourhood study.

Besides, the City has engaged a moderator for property owners who first of all got a picture of the state of buildings in the area. 25% of the houses (approx. 40) proved to be in need of refurbishment and were mostly vacant. Then their owners, most of which did not live in Halle, were traced. In case of interest of the owners, the basic conditions were analysed and possible solutions developed within a longer moderation process. What is important is that the moderator for property owners has large experiences with refurbishment and can provide spontaneous and useful tips to the owners, which would quickly provide confidence. In this way, most small property owners could be convinced to undertake the necessary preservation measures. In doing so, they were supported financially as well as in terms of advice. In the meantime, small investors willing to refurbish have bought numerous properties rated problematic.

Furthermore, the moderator for property owners and the urban planning department of the City of Halle contact other stakeholders in the area. Cultural and social initiatives now also try to support the development in the area with alternative measures. The cultural student organisation “Postkult” for example was established in Glaucha to tackle vacancies and urban waste land creatively. The commitment of creative persons and artists atracts attention by the media and marks the beginning of a change of image within the area. This change of image has led to an optimistic mood within the area increasing the demand for it on the housing market. The change is now underlined by the beginning refurbishment activities. 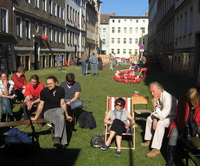 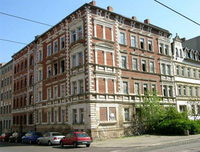 The moderation for property owners has helped to deal with the individual situation of each owner, which had led to an intensive and continuous process of consultation and participation. The costs of the moderation are low but the resulting effect is of great importance for the owners' readiness to act and cooperate. To implement the measures, a certain amount of funds becoming effective was important. According to intial experiences, the average public funding was approx. 50,000 euros per building.

Last but not least the integrated approach of the model project should be stressed. Combining architectural upgrading, image camapaign and the involvement of many actors enabled to activate existing potentials in Glaucha.

Record inserted on 15.12.2009 by the Federal Institute for Research on Building, Urban Affairs and Spatial Development (BBSR) within the Federal Office for Building and Regional Planning (BBR).