Harburg inland port has been affected by a fundamental structural change since the 1960s. In the beginning, production halls and operating sites were given up. But since 1990, the district has been systematically revitalized. On fallow land and in empty buildings, a "new type of mixed buildings" designed for housing, work and leisure activities is currently being created.

Harburg inland port is situated north of the town centre of Harburg and bordered by the Süderelbe River and two railway lines. The northern and western sections are used for commercial/industrial purposes and port operations. The rest of the site still features historic buildings in parts, which are being redeveloped and dedicated to new uses.

In the wake of structural economic changes affecting all harbour operations, Harburg inland port lost out against the much larger Hamburg harbour early on. Given this background, the revitalization approach is aimed at developing a district featuring a unique urban identity within the inland port, whilst preserving and further developing various functional and architectural structures.

The structural shift has triggered changes facilitating new forms of coexistence for port operations, industry, service and research jobs as well as housing and recreational uses. Harburg inland port is thus furnished with a new charisma and new locational qualities. 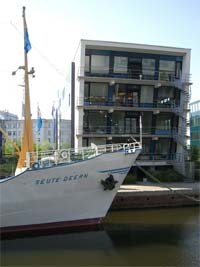 As described in the conceptual framework for the Harburg inland port 2011, the project site, including water areas, measures 131 ha and is characterised by a central transport location. Port operations as well as business and industrial sites had remained active in parts of Harburg inland port and were supported by the Technical University Hamburg-Harburg (TU-HH) locating some of its institutes here. The site also features residential uses, sport boat mooring points and shipyards, as well as green spaces.

Already in 1990, Hamburg City Council had already initiated a development plan for Harburg inland port aimed at building up existing use potentials and enhancing the historic, ecological, topographic and urban design qualities as well as the TU location.

The first stage of the development plan was elaborated by 1993. This plan was subsequently concretized in a second stage applying a detailed urban planning concept. Individual measures put into motion in various locations on the site were based on this concept. They included the conversion of former factory buildings into office buildings, for example. From 1998, diverse new buildings followed, as did the conversion and restoration of silos and storehouses. Numerous historic buildings were restored comprehensively. In order to reduce the through traffic, road spaces had already been redesigned. Another reduction, especially of lorry transit, is envisaged.

Between 2001 and 2003, an important impulse project was created in the shape of the so-called „Channel Tower“. In 2004 and 2005 then, the silo at “Schellerdamm” and the quayside warehouse at “Veritaskai” were revitalised and form the new skyline at the south of the River Elbe. Another important development potential is located on both sides of the eastern train station canal featuring approximately 14 ha of former railway sites. A master plan for offices, services and research as well as 120 residential units was drawn up for this section in 2000. Based on an urban design expert report, approx. 160 apartments are scheduled for construction along the “Kaufhauskanal” (department store canal). The industry canal of the same name is furthermore to be opened up to canoes and rowboats.

The inland port development has meanwhile gained much greater momentum than it had achieved in the mid-90s. It has turned into a lively urban area featuring a mixture of old and new buildings as well as traditional and novel uses. The proximity to the TU-HH and the creation of the TUTech GmbH ensured that numerous technically or scientifically oriented companies could be established in the area, including ten technology companies. The planning of an innovation campus of TUTech GmbH by building and revitalising a historic building being important for the inland port is a consequent continuation of this development.

At the time of writing, the CHANNEL network comprises approximately 160 ventures with a sum total of nearly 6000 employees. They include big conglomerates as well as small high-tech and telecommunication businesses, but also large media companies and international engineering service providers.

At the beginning of 2011, the Hamburg senate released “Schlossinsel” (Harburg Palace Island) and the buildings at the top of the port from the sovereignty of the Hamburg Port Authority. The new urban area will be developed step by step. A new pedestrian swing bridge will recreate the historic connection from the inner city via “Schlossstraße” to the Harburg Palace Island. The redesigned canal square ( “Kanalplatz”), the new pilot office and the refurbished quay walls on both sides of the pilot canal only account for a small part of public investments.

The department for economic affairs, building and the environment is responsible for the urban development-related and technical coordination of the development measures in the Harburg inland port. Investors, project developers, building owners, citizens, associations, businesswomen and men and relevant authorities are involved in the development within a so-called “Harburg inland port advisory group”. The inland port furthermore forms the southern part of the area of the International Building Exhibition (IBA) Hamburg GmbH. Current IBA projects include the housing projects at “Kaufhauskanal” and on the “Schlossinsel” as well as the newly established “Park auf der Schlossinsel” (park on Palace Island) as a central park for citizens. The remains of the former Harburg palace can be found in the middle of the park. The IBA Hamburg GmbH thus supports the port area being supplemented by lively residential areas with green and open spaces, catering amenities, retail and leisure uses. The new mixture within the commercial and historic port environment as well as the commitment of the various parties involved have changed the public perception of the inland port and resulted in an own image beyond the borders of Harburg. 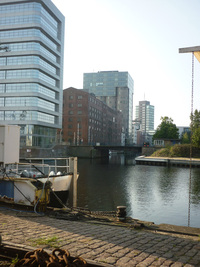 The consistent, internally coordinated strategy pursued by the City Council of revitalising urban wastelands has proven its viability over a long period of time and demonstrably contributed to preventing “building activities on green land”.

The project is characterised by extensive and innovative cooperation procedures in the planning and realization phase. The envisaged aim of creating a lively urban neighbourhood featuring a new mixture of housing, research and professional qualification, service and office uses, work and leisure activities is increasingly becoming a reality.

Record inserted on 01.06.2005 by the Federal Institute for Research on Building, Urban Affairs and Spatial Development (BBSR) within the Federal Office for Building and Regional Planning (BBR).