Property owners and businesses joined with the local administration to maintain and strengthen Sachsentor as a retail location. As a result, they were able to commit jointly to various measures which contribute to improving the attractiveness and competitiveness of the pedestrian area. An attractive inner city has been created for businesses, customers and residents. 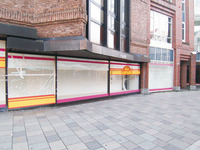 The catchment area includes the Bergedorf district with a population of approx. 117,000, along with the neighbouring districts with a total of approx. 100,000 residents. The Hamburg inner city is 15 kilometres away. The Sachsentor neighbourhood is located in the centre of the district. It is a traditional retail location which is characterised by its historic facades and a varied range of retail companies.

In the past few years, however, a total of 15,000 sq.m. of retail space has been lost. This led to a deterioration in the branch mix. The unavoidably vacant shops and commercial spaces led to customer frequency falling considerably. Numerous local stakeholders have tried to enhance the location in the past. However, the active members were faced with a growing number of "bandwagon riders". 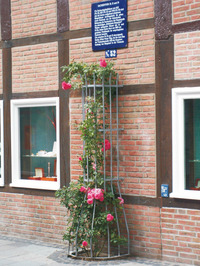 The increasing loss of attractiveness should be countered by a Business Improvement District concept (BID). This was achieved on the basis of the "Law to strengthen the retail and services centre (GSED)" passed by the Hamburg citizens on 28 December 2004. It includes property owners and businesses, together with representatives from local government, becoming involved in measures which contribute to maintaining and strengthening retail locations.

In January 2004, a working group was formed and the BID programme was drawn up in the workshop. Within the framework of a roughly one-year initialisation and concretisation phase, the BID working group was formed from property owners and retailers under the management of WSB (Wirtschaft und Stadtmarketing für die Region Bergedorf e.V.) and with the involvement of the Bergedorf district office. It prepared a definition of the area and a measures and financing concept.

The WSB was used as the management and through a public-private contract was entrusted with implementing the concept and measures, and was supported by a voluntary BID steering group, service providers, businesses and members of the administration. It is possible for all property owners to participate actively in the BID work. A constitution governs the details regarding participation, duties and rights of the steering group members.

Authorised by the GSED, affected property owners, above all, were charged a public levy by the City of Hamburg for the term of three years and then paid out for the implementation of the planned measures. A total of € 150,000 was spent during the BID term.

The concept development started in October 2005 as the first publicly visible activity with a representative passer-by survey. Subsequently, projects for removing graffiti and for managing vacancies were implemented in the first year. Meanwhile, many measures have been completed, e.g. new paving, lighting, sculptures, fountains and the like, which enhance the attractiveness of the Bergedorf centre for customers, visitors and residents. They also improve the general conditions for the retailers and service companies located there.

With the GSED. the property owners were able to design a geographically limited area themselves and influence the inner city development process. For the first time it also became possible, as a result, to involve all property owners in the financing of the agreed activities and to make these payable for all. For Bergedorf, this represented the correct approach to counter the problem of "bandwagon riders". Meanwhile, the public perception of the BID district has changed positively as a result of the increased presence of the media. In addition, Bergedorf is receiving more attention from the economy, administration and the local press.

One feature of the project is the Hamburg law initiative. This allows property owners and businesses autonomously to agree and implement measures to upgrade and enhance Sachsentor as a retail district.

Self-organisation and financial responsibility are guiding motives of the BID. The concept ensures there is a fair distribution of burdens across all shoulders and close cooperation with the district administration. This new type of management and financing construction has led to the "Sachsentor District" becoming an attractive retail location. It is characterised today by enhancing historical facades and its varied range of offers. The neighbourhood has become a popular location for customers, visitors and residents and is a good address for retailers, service providers and restaurateurs.

Record inserted on 19.01.2009 by the Federal Institute for Research on Building, Urban Affairs and Spatial Development (BBSR) within the Federal Office for Building and Regional Planning (BBR).