Integrative and ecological housing with a view of the Elbe

An 11-storey building meeting passive house standards was created in Hamburg as a multicultural housing project for 40 individuals aged from 4 to 90 years. The nature of the construction additionally facilitated the establishment of a district park in the densely populated St. Pauli district.

In Hamburg (pop. 1,78 million), a neighbourhood action group was established in connection with the Hafenstrasse squatter movement in the St. Pauli district with the aim of improving the quality of life in the residential quarter and counteracting the scarcity of green and open spaces. The council had originally planned to use a vacant plot – the result of a 1970s demolition - for the construction of a self-contained arrangement of 5-storey buildings. As part of the art project “park fiction”, local activists presented alternative plans for the creation of a park aimed at improving the quality of life in the district. 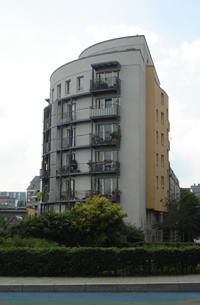 Lengthy negotiations with the building authority and a “round table” finally resulted in a compromise: a part of the area was to be dedicated to council housing and the new “Antoni-Park” was to be created on the roof of a lowered school sports hall. Some members of the park action group decided to establish an integrative housing project that was intended to exert a stabilizing influence on the environment. In contrast to other projects, many of the residents hadn’t met previously. The founders wished to realize their dream of living with completely diverse people and tried to mobilize interested parties in information events, classified ads and newspaper articles.

The result was the socially and architecturally integrative multicultural housing project “Park House” (Parkhaus) as part of the “Hafenstraße Co-op St. Pauli”. Architecturally integrative here means: threshold-free housing throughout with lift, broad doors, ramps etc. A number of entirely wheelchair-compatible apartments are provided additionally. Socially integrative means that people with little money can also live here with an Elbe view. The residents were required to raise 15% of total building costs independently to finance the publicly subsidized housing project. Anyone unable to pay this co-op share was supported with donations and loans by the charitable association “Neighbourhood Housing” (Kiez Wohnen e. V.). 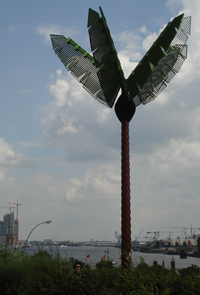 Under the consultancy provided by alternative redevelopment agency „Stattbau Hamburg“, very diverse apartments were created in close coordination with residents and the architects “Architekturbüro 19” between 2002 and 2003: from 1-room apartments up to shared apartments for five persons. Three of a total of eleven floors are situated in the basement. They house district garages for the neighbourhood with 23 parking spaces. The top floor accommodates the common room, which is encircled by a roof terrace. This is where resident meetings and parties are held, as well as public meetings for the district.

Another unique feature is the fact that the residents decided in favour of a passive house construction. The annual heating energy consumption is less than 15 kWh/m². Very good thermal insulation, a special ventilation system and large south-facing windows ensure that the spaces are heated with the existing heat and require practically no conventional heating. A photovoltaic system in the facade produces additional energy. The Passive House Institute certified the building in November 2003. At the time of writing, the “Park House” is Europe’s largest passive house.

The compact construction facilitated the creation of a small district park, which is being realized in several stages following completion of the architectural engineering and is referred to in the object's name "Parkhaus".

Via a cooperative housing group project, architectural and social integration was achieved in a passive house standard multi-storey residential building situated in a very attractive inner city location. By virtue of the compact architecture, a district park could also be created.

Record inserted on 01.07.2004 by Lehrstuhl für Planungstheorie und Stadtplanung, RWTH Aachen and updated by theFederal Institute for Research on Building, Urban Affairs and Spatial Development (BBSR) within the Federal Office for Building and Regional Planning (BBR).