The urban restructuring in a large housing estate is used to improve housing and free space qualities. The conversion project simultaneously contributes decisively to the transformation of a formerly mono-functional industrial location. 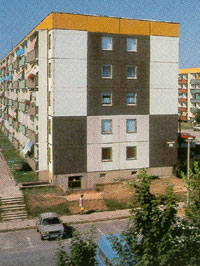 Leinefelde is situated in the “Eichsfeld” region between Göttingen and Gotha. In the GDR period, the former village had grown into an industrial town. Between 1961 and 1989, the population increased from approximately 2.600 to more than 16.000. Following German reunification, many of the jobs in the local cement and textile industries were cut. The residents emigrated in large numbers and in 1997 the unemployment rate rose to around 20%. By springing into action early, the council nonetheless successfully managed to establish new employers in the area, reduce the unemployment rate to less than 16% (2000) and slow down further emigration. The prefab estate „Leinefelde-Südstadt“ was built between 1960 and 1990. Owing to deficient maintenance, acceptance of the prefab apartments declined and the vacancy rate rose to around 27% (2001). On the positive side, the “Südstadt” district is still provided with a sufficient number of schools and child facilities. But the ground plan design and in particular the free space qualities had been neglected for a long period of time. 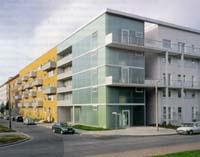 The conversion and upgrade of the large housing estate was based on an outline plan. An urban axis featuring social infrastructure amenities stretches from the modernized “Eichsfeldhalle” building to the southern edge of the estate, improving the district’s connection to the town centre in the process. In some areas, the demolition of buildings (or building sections, respectively) had already resulted in the creation of new open spaces and an enhanced quality of free spaces. Further demolition measures are planned. The residential buildings were converted and modernized in a modular system featuring compatible individual elements. The result are new housing and building types, for example apartments with roof terraces, maisonette apartments and free-standing multi-family buildings, the so-called “town villas”. Overall, a particular emphasis is placed on individualized facades in a high-quality design intended to support resident identification with their own homes and environment. The council was largely responsible for initiating the district restructuring process. The apartment owners and citizens were involved in the overall planning and individual measures from an early stage. The development process is continuously monitored by the council’s administration and politicians. The community engagement leads to intensive citizen information and involvement and hence to a successful planning and realization cooperation. 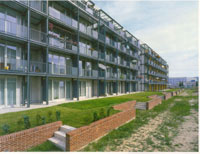 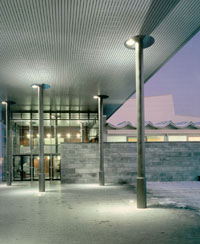 The development strategy for the Leinefeld “Südstadt” district is based on focussing and carefully coordinating various measures. The flexible modular sys tem and intensive process design proved particularly helpful. The unavoidable demolition measures were used as an opportunity for future-oriented renewal in a social, housing and urban sense. Various demolition and conversion projects exemplarily demonstrate possible benefits achievable for housing and free space qualities in the wake of an urban restructuring process. The new qualities simultaneously contribute to social and economic stabilization.

Record inserted on 01.08.2002 by Lehrstuhl für Planungstheorie und Stadtplanung, RWTH Aachen and updated by theFederal Institute for Research on Building, Urban Affairs and Spatial Development (BBSR) within the Federal Office for Building and Regional Planning (BBR).