In the GDR, Magdeburg was the central industrial city for heavy machine engineering. Because of the central geographical location, in terms of transport connections, a considerable increase in the population was expected in the early 1990s to more than 300,000. Since German Reunification, the city has de facto lost more than 60,000 inhabitants. In 2004, only approx. 227,000 people still lived in Magdeburg. By 2010, a further fall of around 20,000 inhabitants is forecast.

Despite the fall in population, the housing stock has increased since 1990 by around 15,000. At present, Magdeburg has a statistical oversupply of approx. 30,000 apartments, which is expected to increase by 2010 by around another 10,000 apartments. The local urban redevelopment concept envisages a reduction in the housing stock of 20,000 apartments. To this end, reduction measures in the large housing estate of Neustädter Feld have been implemented. The neighbourhood is to be adjusted to the reduced demand and simultaneously upgraded through the redevelopment of the prefabricated buildings into forms of terraced townhouses. 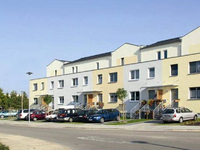 In 2002/2003, Wohnungsbaugesellschaft Magdeburg mbH (Wobau) realised the partial reduction of 5-storey prefabricated buildings at Resewitzstrasse 1-12 and Othrichstrasse 35-44. Three floors of the prefabricated buildings of type P2 were removed so that the previously 220 apartments became 44 generously designed apartments in terraced houses. The average living space in the new apartments is 121 sqm. To do this, the structure of the existing building was greatly altered. Entire floors were demolished and for structural reasons a new tie has to be created. The stairwell was reduced and divided into two separate stairwells. Windows were adjusted and supporting walls partly supported. The ground floor has direct access to the outside through an extended terrace. The attic can be developed by the tenants if required.

The redevelopment costs totalled around € 2,600,000€, the basic reduction costs totalled approx. € 260,000. The construction costs (gross) per m² of living space totalled approx € 947/m². All the terraced houses were completed in 2003 and are fully let. The buildings are currently only offered for rent. Because of the smaller design, however, it seems possible to convert these into privately owned apartments in the future.

The project was given "special recognition" within the framework of the Bauherrenpreis 2003. 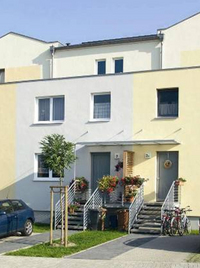 The impressive new cubature on the old building layouts, but also the new, varied supply of different housing forms, are particularly positive. On one hand, this creates new housing supply and, on the other, new high quality inner-city. It must be emphasised that this change has been realised by converting 5-storey prefabricated buildings into rented terraced houses. The preceding participation process led to a high level of acceptance from the users. Moreover, the features of the urban district have been considered. In this way, the terraced houses intercede between the dimensions of the prefabricated buildings and the building forms in the detached housing area. Wobau Magdeburg has used the favourable local conditions in the ever popular prefabricated housing estate of Neustädter Feld in order to adjust its own housing stock to the demand and simultaneously to upgrade the location.

Record inserted on 23.07.2009 by the Federal Institute for Research on Building, Urban Affairs and Spatial Development (BBSR) within the Federal Office for Building and Regional Planning (BBR).