The partly wasteland, partly unused harbour area on the Verbindungskanal has been upgraded to create a new cultural location. Open spaces and the "Stadtpromenade" (City Promenade), the "Quartiersterrasse" (Neighbourhood terrace) and the "Freiraumtaschen" (open space pockets) were created direct on the canal. They provide space for various uses and user groups. 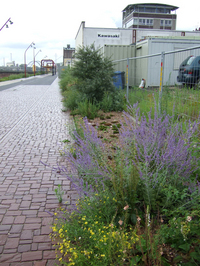 The Jungbusch neighbourhood is situated between the inner city and the Mannheim harbour (pop. 325,000). It was last characterised by decreased use as a harbour on the Verbindungskanal. In the early 1990s, a structural change started in the city's old red-light area which opened up new prospects.

With a mix of city investments, project funds from the state and private finance, a new inner city development was started. The neighbourhood is now upgraded and has been geographically freed from its "island location" with the hard borders between harbour and inner city. The overall inner city open space network has been expanded at strategic locations. This happened through infrastructural, urban planning and, not least, also through socio-cultural measures. The activities of the city administration were supported by neighbourhood management and were brought into the district.

In 2007, the project was one of three leading projects of the Mannheim 400th Jubilee.

From 2000 to 2006, the project was supported within the framework of URBAN II, and since 2003 within the framework of the Soziale Stadt urban development support programme. Between 2006 and 2007 it was evaluated as a case study in the research project "Innovationen für familien- und altengerechte Stadtquartiere" (Innovations for urban squares suitable for families and elderly people) in the federal research programme "Experimenteller Wohnungs- und Städtebau" (Experimental Residential and Urban Development) - ExWoSt. 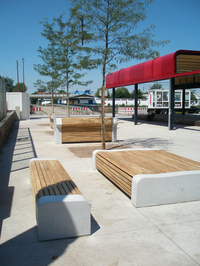 The backbone of the urban open space development on the Verbindungskanal is formed by an eight to ten-metre wide and approx. 1.3 km long strip of land between Rhine and Neckar. A promenade has been built here with "open space pockets" which offer space for different ¬uses and user groups. To the north, the beach bar in the Musikpark forms the entrance to the newly designed open space.

This is followed by the promenade deck and the playing fields next to the student housing. They are available to all the residents as a place for playing and resting. In addition, residents' gardens were created within the framework of "Kunst im öffentlichen Raum" (art in public space). A square has been built next to the newly relocated "Popakademie Baden-Württemberg" and the "Musikpark Mannheim" foundation centre as a wide entrance to the promenade. People from all generation who are interested in culture have a meeting place a the "Kaufmannmühle" square. The neighbourhood square at the Teufelsbrücke bridge and towards the inner city axis Jungbuschstrasse is an important interface to the neighbouring urban district. The flat, terraced square, with comfortable seating, allows everyday use, temporary campaigns and events. Its location and design invite old and young to linger. A city loggia with retractable roof, and the hard floor coverings, round off the design elements of the square. The open space system is expanded to include a children's play area on a former car park of the "Islinger-Areal" site and skate park on the Kurt-Schumacher-Brücke bridge.

The design of the promenade according to modern principles largely reflects the strong character of the harbour. It is stony and fitted with benches, seats, lighting and shading roofs. Railway tracks and old coverings have partly been kept.

Hafenstrasse, which used to form the western edge of the neighbourhood, has moved into the neighbourhood as a result of the development of the waterside. It is now perceived as a lively commercial street. The 30-km/h zone has been retained and developed further. Paths between the neighbourhood and the Verbindungskanal at three pronounced locations have been designed as "carpets" with colour and artistic reliefs in the paving.

The "Turnhalle plus" sports hall has been built close to the Verbindungskanal. It expands the sporting and leisure facilities in the urban neighbourhood. Alongside rooms for sporting use, neighbourhood-related community activities are possible here. The associated open space has also been redesigned as part of the project.

The project area remains part of the harbour area. The city has leased the promenade and squares for 30 years. It therefore does not have to be designated as green space or traffic space with a special use. It is a temporary use "tolerated" by the owner. The staatliche Rhein-Neckar-Hafengesellschaft Mannheim (HGM) manages and leases the spaces for the state as owner. At present there are no plans to sell the spaces owned by the state. 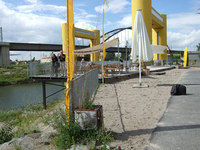 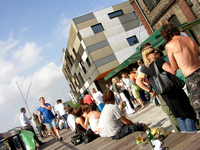 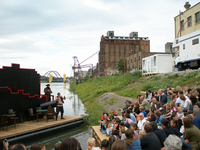 The project stands for the "Stadtentwicklung durch Freiraumqualifizierung" (urban development through open space qualification) strategy. Multiple usable and changeable rooms were created, whose use addresses various focus groups and at the same time remains open to all users.

The focus of this project was on developing a location with a creative scene. The promenade connects, offers additional space for play and thus serves the cultural location. With the new Popakademie and the Musikpark it has a city-wide importance. The inner city is drawn to the water of the Verbindungskanal. The Jungbusch neighbourhood now profits from the urban and cultural upgrading. The harbourside has become a new address for the neighbourhood.

Record inserted on 12.01.2009 by the Federal Institute for Research on Building, Urban Affairs and Spatial Development (BBSR) within the Federal Office for Building and Regional Planning (BBR).