Starting in 2000, a new inner city housing, work and leisure district is being created on the site of the “old exhibition centre”. The district planning process achieved a new quality of resident involvement. As early as during the design phase, residents were able to inform themselves on the urban development plans and were given the opportunity to submit wishes and suggestions regarding a greater number of planning process issues than is normally the case. 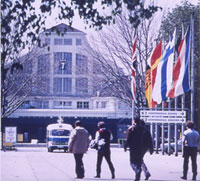 The Bavaria Park in the “Theresienhöhe” district of Munich (pop. 1.354.000 on 31.12.2009) was established in the middle of the 19th century. The Munich exhibition centre gradually settled all around the park until in 1998 it had become Munich`s most important exhibition site. Due to a lack of development potentials, the operating company decided in 1987 to relocate the exhibition grounds to the site of the former "Riem” airport. The redevelopment of the former exhibition site to a vital urban quarter became a key project of the city development conception “Perspective Munich” with the key note “compact-urban-green”. The residents of the neighbouring, densely populated residential quarters took a very critical perspective of the redevelopment of the former exhibition grounds, because they most of all hoped for an amelioration concerning the relative lack of green spaces. 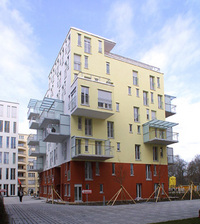 As the owner of the former exhibition site, the council resolved to take both the development and marketing of the project into its own hands. The Theresienhöhe project was to be aimed at developing a compact inner city residential area that would harmonize with the environment in social and urban design terms. In 1996, a cooperative competition for urban design ideas held in order to find development concept ideas was won by the architects Steidle + Partner and the landscape planners Thomanek + Duquesnoy.

At the heart of the new district lies the Bavaria Park and three listed exhibition halls which will be converted for the Deutsche Museum. To the north and the west of the park, a core section with shops, offices, service areas and apartments has been created, along with a residential quarter opposite the Bavaria Park. To the south of the park, a dense residential area has been constructed. Further core areas and a primary school have been constructed along the peripheries to neighbouring streets.

The green space supply is enhanced by upgrading measures in Bavaria Park, provision of a smaller green area in the vicinity of the new housing developments and by the landscaping of two squares. A sum total of 1.400 apartments (50% of which are publicly subsidized) and approximately 4.000 jobs were created in the district by the end of 2010. A particular challenge was the re-use of the former three-floor exhibition underground car park. It was toughened up, partially converted and overbuilt. With the cooperation of the urban housing associations this realisation was the biggest building block of the new city district. The “Media factory Westpark” puts emphasis on the area of commercial usage. With a mixture of old and new ambitious architecture it offers a new home to companies from the media sector.

In order to address neighbourhood concerns and optimally comply with the occasionally very divergent requirements during the planning process, Munich council attached great importance to an intensive communication between all stakeholders and extensive resident involvement at a very early stage, all of which was organized as an “open planning” process. Even before the urban design competition, residents had been invited to a planning workshop where they could formulate their ideas for the district Theresienhöhe. These specifications were later presented to the architects and award jury at the first competition colloquium. The residents also discussed the respective design stages with the district committees of the surrounding boroughs before each of the four colloquiums to follow. The minutes of these discussions were then also integrated in the competition once more. This interative process – which in parts also involved the real estate and housing trades – facilitated the direct inclusion of resident suggestions in the design process. Following the jury decision in the competition, the council held another planning workshop where residents could evaluate the competition results. A permanent contact person within the administration additionally supported the communication process between council and residents.

This “open planning” led to sophisticated planning results enjoying a high degree of acceptance – even if not every single wish could be fulfilled. 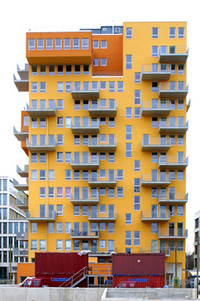 The new involvement procedure ensured that the ideas generated by residents of the surrounding urban districts could already be included in the planning at the draft stage. The interative process between residents and planners in the urban architecture competition, with preparatory and follow-up activities via planning workshops, led to a high acceptance in the neighbourhood and the sophisticated overall urban design quality of the project. This procedure has become a common custom in Munich`s neighbourhood community involvement. 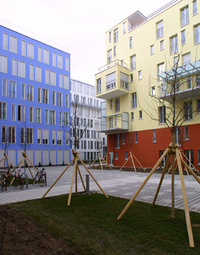 Record inserted on 11.10.2004 by Lehrstuhl für Planungstheorie und Stadtplanung, RWTH Aachen and updated by theFederal Institute for Research on Building, Urban Affairs and Spatial Development (BBSR) within the Federal Office for Building and Regional Planning (BBR).