A solar local heating facility has been built in Neckarsulm for the entire urban district of Amorbach II. Innovative technology, such as a gradually developed, central earth probe stores for heat storage, has been used to a large extent. 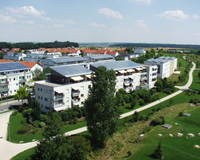 Neckarsulm (pop. 27,000) is one of the large district towns in the Heilbronn administrative district. Since the early 1990s, the city has been following an environmental policy which relies, in particular, on using solar energy in conjunction with ecological urban development. In 1997, the development of the Amorbach II urban district was started, with the aim of realising a solar-powered heat supply for the entire urban district.

In the Amorbach II district, the inner city concept envisaged a development with different types of building. In the first construction section, apartment buildings were developed, while in further sections terraced and detached houses were also realised. All the buildings have been built to a low-energy standard. In addition to the structural development of the urban district, a district park was developed. It offers residents open spaces with many different functions and serves as a meeting place. The core of the Amorbach II development is the solar-powered local heat supply using earth probe storage. This is adjusted to the development sections in several expansions. Starting with the pilot storage realised in 1997, with a volume of around 4200 m³, the current storage volume is around 65,000m³, or almost half of the planned total volume. The storage system currently comprises around 530 earth probes, which are buried in the soil according to a specific plan. It is mainly charged from roof-fitted collector fields. In summer, solar-heated water flows through the probes and heats up the earth. The subterranean rock stores the heat. When the need for heating in the buildings increases in autumn, cold water is passed through the probes. It is heated and distributed to the buildings via the local heating system. During normal operation, the temperature in the centre of the storage system reaches up to 80 °C. The storage system has a modular design and can be expanded by installing more collector space. Already by the end of 2004, the plant supplied heat to a primary school with sports hall, a shopping centre and around 270 apartments. The settlement has around 7000 m² of absorber surface. The desired cover totals 50%. In practice, almost 40% has already been achieved. In future, a heat pump will ensure a more efficient exploitation of the "stored" heat.

Moreover, interested residents have invested in a community solar heating plant in the Amorbach urban district. The plant on the Grenchenstrasse car park has a collector surface of 440 m². A special project is also the solar garage on the Stadtwerke's site, where batteries of electric cars can be charged for free. The City of Neckarsulm has been awarded numerous prizes for the design of the urban district and the use of solar power for local heating in the Amorbach II district. Within the framework of the local authority support programme "Solarenergie", the city decided to build photovoltaic and solar heating systems. "Klimaschutz", which is also a local authority support programme, supports owners of old buildings with grants for environmentally friendly installations, such as heat insulation or the installation of heat pumps. 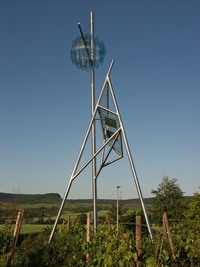 Record inserted on 31.03.2009 by the Federal Institute for Research on Building, Urban Affairs and Spatial Development (BBSR) within the Federal Office for Building and Regional Planning (BBR).