The Wiley barracks site became available in 1991 with the departure of the US armed forces. The army’s withdrawal had the consequence that an overall area measuring around 76 ha could be devoted to an urban restructuring process. The plots were initially returned to the federal authorities, from whom the council purchased the site in 1994. A new urban quarter is being created in the former barracks area since 1994.

In combination with the release of further former military areas in Neu-Ulm, the recycling of this former barracks site assumes a high significance for the entire town. The conversion was therefore initially approached from a comprehensive perspective as part of a "structural concept for US-sites” which applied to the whole town and was concretized on a site level via outline plans.

A special commission was established by the council for the former US sites in order to focus all the planning and building law issues of all conversion measures, as well as the property-related and financial competences.

Between 1991 and 1995, the project was funded and evaluated within the research field “Conversion – Urban Planning Opportunities via Re-Dedication of Military Facilities" (Konversion – Städtebauliche Möglichkeiten durch Umwidmung militärischer Einrichtungen) which is a part of the federal research programme “Experimental Housing and Urban Development” (Experimenteller Wohnungs- und Städtebau. 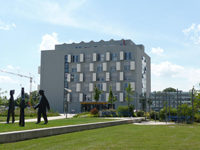 The site of the former Wiley barracks is situated in a central location near the town centre of Neu-Ulm (pop. 58.500), features favourable transport connections and is subdivided into the three sections Wiley south, centre and north.

An entire new urban district linking residential, employment and leisure functions in a trend-setting manner is being created here. The conception was based on the assumption that the existing building stock and infrastructure were to be recycled wherever this was possible from an economic and structural perspective. The former barracks area’s three subsections are characterized by different functional emphases.

In Wiley-North, the former accommodation buildings were refurbished and a residential facility for senior citizens, various service amenities and a technology and business start-up centre were accommodated. The expansion of the former officer cinema into a multiplex and the construction of a multi-storey car park with 300 parking spaces have been completed. The construction of a technological high school is scheduled for 2006.

Wiley-Centre predominantly features leisure, sports and cultural uses which are already very well frequented. The conversion in large parts relied on recycling former military facilities. As part of the 2008 state horticultural show, a generous district park is to be created in Wiley-Centre.

In Wiley-South, the emphasis is on housing. Following completion of the first of three construction stages, 600 residents live here at the time of writing.

The forms of housing created are generally very varied. They include semi-detached, terraced and town houses, as well as lofts and modern apartments in multi-family dwellings.

The target groups are just as varied: there are specific apartments available for singles, families and older individuals, as are favourably-priced construction, ecological construction and exclusive objects. The aim in the Wiley-South section is the creation of a network of small-scale employment and residential units. A unique marketing aspect is the district’s focus on technology and science. Particularly fast data connections can be established via a glass fibre grid or broadband cable, respectively, which also applies to the residential plots. A recycling concept was elaborated early on as a management measure for the demolition and razing activities. The consequence was that virtually all the material created by demolishing reinforced areas was recycled and reapplied within the area (mostly in road construction and incorporated in the green space). In order to protect good building stock from dereliction, the council decided to populate the area with interim users. 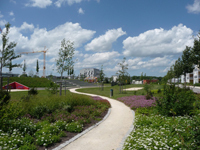 The conversion was initially approached from a comprehensive perspective as part of a "structural concept for US-sites” which applied to the whole town and was concretized on a district level via outline plans. The outline plan was passed by the council and has proven itself to be very stable in its basic conception. Key projects have turned out to provide important impulses. In Neu-Ulm these particularly included the system buildings and barrier-free apartments of the housing society “Neu-Ulmer Wohnungsbaugesellschaft”, and the passive house estate with eight units. The council has opened an information office on the site where plans and concepts can be studied and information is available. This helps ensure that investors approach the council of their own accord.

The commercial areas are marketed jointly with the neighbouring city of Ulm via the urban development association “Stadtentwicklungsverband Ulm / Neu-Ulm”. The marketing of the industrial areas is furthermore embedded in the inter-municipal association “Stadtentwicklungsverband Ulm / Neu-Ulm” which facilitates the cooperative promotion of trade by the neighbouring cities located in the two states of Bavaria and Baden-Württemberg. 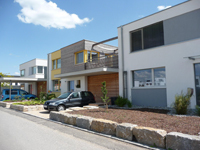 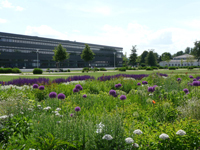 The former barracks areas are of a strategic importance for the development of the entire town. The redesign of the military site consequently called for a comprehensive approach to the planning and construction.

The basis for this was provided by the establishment of the special commission “US sites” through the council. The advantage being that the commission was able to decide on all the locally required issues. A high transparency and acceptance was achieved by early involvement of the public in the planning process. Public involvement continues to be a central instrument in rendering a project as complex as this acceptable on a broad level.

An essential success factor is the integratio n of the former barracks site in an overall area recycling strategy for the entire city.

Recycling meant that building on green land could be avoided in other locations and that the town could be rounded out in the south.

The integration of the project in a city-wide perspective, the area recycling and the extensive ecological orientation of the overall project deserve special mention as innovative elements of a sustainable urban development.

Record inserted on 15.07.2005 by the Federal Institute for Research on Building, Urban Affairs and Spatial Development (BBSR) within the Federal Office for Building and Regional Planning (BBR).