In Neuruppin’s large housing estate WK I-III, the community centre “Krümelkiste” has been created in place of a nursery which is no longer used. Several supporters from urban district-based advice and education institutions prepared the planning process. Since 2006, the building has been used as a central urban district meeting place for all generations. 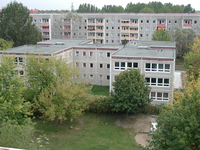 The Neuruppin housing complex I-III (WK I-III) was built on an industrial site in the 1970s and 1980s to the south of historic Altstadt area. It is mainly characterised by five-storey, prefabricated buildings. The district has 4,500 residential units, in which approx. 10,000 people live. Its facilities include a doctor’s surgery and a large shopping centre (REIZ).

As the district has a unilateral housing supply (80% 2-3-room apartments),many better-off residents with children left the district over the years. The proportion of transfer income recipients (unemployment benefit I and II) and single parents, in particular women, continually increased. The consequence was a change in the previously heterogeneous resident structure. The demand for public children’s facilities, for example, changed as a result of the demographic change and fall in children numbers. As a result, the former "Kinderkombination" in WK III closed due to a lack of registrations.

In 1999, the urban district was included in the national and state urban construction support programme “Soziale Stadt” (Social City). Since then, a large number of improvements to the living environment have been realised with involvement from the residents. 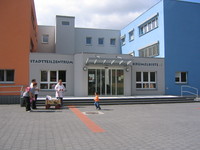 As a result of the falling children numbers in the neighbourhood, the nursery had continually become smaller. At the same time, various organisations moved into the building from 1995, which did not affect the operation of the nursery. Three years later, the Internationale Bund e.V. and Jugendhilfe Nordwest Brandenburg (JNWB), were already using the rooms in the Krümelkiste to give the State of Brandenburg a concept for the approx. 2,000 sq.m. of space no longer required in the former Kinderkombination. It envisaged the conversion into the "Krümelkiste" community centre as a new centre in the urban district, to become a “House for all” with advice, education, youth support, urban district office and citizens’ café.

As a key project of the “Soziale Stadt” programme, since 2002 the building has been converted and renovated into a community centre for the entire district. The building was redeveloped according to the wishes and requirements of the future users.

With the completion of the renovation in 2006, a residents’ meeting place was created on the ground floor. Jugendhilfe Nordwestbrandenburg has created generous rooms for its “Jugend, Umwelt, Technik” workshops. An unemployment service has moved into the Krümelkiste. The Arbeiterwohlfahrt offers advice and Initiative Jugendarbeit Neuruppin trains apprentices in the area of gastronomy. The urban district office, which managed and organised the redevelopment process, has its office in the Krümelkiste, along with the Freiwilligenagentur Neuruppin (volunteers’ agency). The content and organisation of the multi-generational work is located in the womens’ and family centre. The “Krümmelkiste” has become a place for all generations to meet. Furthermore, it has been able to develop into a place for education and advice. 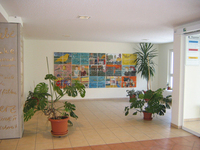 The national government, the State of Brandenburg and the city each funded one third of the conversion costs of Euro 1.9 million. The building is owned by the Fontanestadt Neuruppin (Neuruppin, city of Fontane) and is largely managed by the users themselves. The individual management organisations remain independent, have individual use agreements and each pay the management costs and a maintenance reserve. The Internationale Bund e.V. performs the role of landlord. 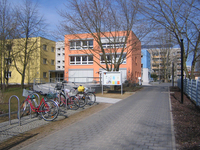 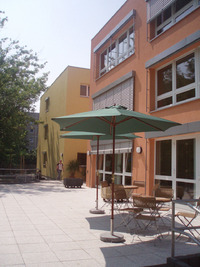 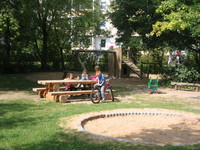 The neighbourhood’s image in the City of Neuruppin was strengthened with the conversion. As a result of the community project preparation and self-managed use in cooperation with citizens, management organisations and city administration, the project also has an internally stabilising effect.

The projekt site ist to be found at postal code: 16816 - town: Neuruppin - street: Otto-Grotewohl-Straße 1a.

Record inserted on 19.08.2008 by the Federal Institute for Research on Building, Urban Affairs and Spatial Development (BBSR) within the Federal Office for Building and Regional Planning (BBR).