In 2006, the decision, to close the British garrison location in Osnabrück, was taken. As a result, the city had to find a new form of use for more than 160 hectares of conversion area. This is why in 2007 a systematic planning process entitled “KonVisionen”, which intensively involved the public, was launched, which in the first four years has been very successful. 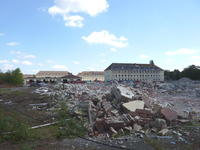 Reorganisations within the British Army in 2006 resulted in the decision to abandon the formerly largest garrison location outside the United Kingdom in Osnabrück by 2009. In handing over the last barracks area to “Bundesanstalt für Immobilienaufgaben (BImA)” (federal agency for public property) in March 2009, six barracks areas with a total area of about 160 hectares have become available for new developments in the city area of Osnabrück. Since then, the task of the whole city has been to make barracks areas, which had so far not been open to the public, available to civilians and to conceptionally integrate these abandoned areas in the urban structure. A challenge for the city especially is the enormous number of short-term potentials of areas against the background of a slightly declining population.

The locational quality of the six former barracks sites is very different. The “Am Limberg” barracks (formerly Mercer and Imphal Barracks) and the barracks at “Landwehrstraße” (formerly Quebec Barracks) are rather situated on the edge of the city while the “Winkelhausen” barracks (formerly Roberts Barracks) in the port and the Scharnhorst, Metzer and Von-Stein barracks (formerly Belfast, Prestatyn und Woolwich Barracks) could be classified as close to the centre. The British housing estates situated outside the barracks areas cover approx. 1,350 housing units and extend over three urban districts, that are partly close to the inner city. Following withdrawal of the British Army, two school sites and a former sports field became furthermore available for further development. 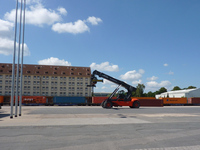 In order to develop the abandoned barracks sites, a large planning and participation process involving citizens and stakeholders was started at the end of 2007 based on a decision of the city council. The related public relations work was decided and monitored by a “Conversion” project committee of the city council of Osnabrück. Various public relations instruments were applied: a "conversion perspective plan" was worked out for the whole city. The intensive participation process was continued when working out conceptions in various areas of the city (e.g. developing perspective plans for barracks areas, urban development competitions etc.). The project has been supported since 2007 by an informative website and also offers the opportunity to participate online. Furthermore, public inspections of barracks areas and days of action were used to address citizens and to provide them with the opportunity to experience areas and buildings that could not be accessed before. Temporary uses of buildings and areas for events, cultural or sports facilities also direct people’s attention to the former military sites. The term “KonVisionen”, established two years after the beginning of the project, gets the citizens of Osnabrück to understand the changes caused by the withdrawal of the British Army as a chance for urban development, not as a step backwards.

In the conversion perspective plan, proposals for uses depending on location, predominant type of building and natural environment are formulated for each area. Via competitions or master plans, the perspectives were used for concrete designs.

Against the background of slightly declining development tendencies and with regard to their large number and size, the areas cannot be marketed in the short term, the whole conversion process is probable to take many years. In order to revitalise the areas nevertheless, the City and “Bundesanstalt für Immobilienaufgaben (BImA)” fell back upon temporary uses already established in some places and planned for others. For the temporary uses in the different places, it is especially important that they are similar to or support ideas for permanent uses formulated in the perspective plan. This can be shown by the example of the following three locations:

The 14.2 hectare area of the Scharnhorst barracks, abandoned in 2008, is the largest of altogether three barracks areas in the district of Westerberg. As it is close to the university, the site was planned to be converted into a science park and residential area. This is why the majority of the barracks buildings was demolished to create space for InnovationsCentrum Osnabrück (ICO), a technology and start-up centre. Parts of them were reserved exclusively for residential purposes; innovative and modern forms of housing, also addressing people working at the science park, are to be developed and added. Already at the end of 2008, a start-up business for fiber-reinforced composite technology and light-frame construction was established in a former tank hangar. This initial temporary use does not only fit well with the planned science park in terms of concept but also caused a start-up centre to be integrated in the plans. All in all, 16 offices have been temporarily let to founders of start-up businesses. 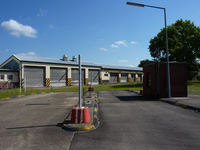 The site of the former 31 hectare Winkelhausen barracks is situated close to the port of Osnabrück and has a siding. It is therefore planned to be developed into a high-quality commercial and service location and meanwhile has been fixed in a legally binding land-use plan. In the middle of 2010, the majority of the site was acquired by “Stadtwerke Osnabrück AG”, the local utility companies. The development was especially pushed by a logistics service provider, which saw the infrastructural potential of the former Winkelhausen barracks and is temporarily using a part of the site for combined freight transport. This use shall now be permanently integrated on the site. Another company, operating all over Germany and selling coffee machines, decided to establish itself at the Winkelhausen barracks and plans a new building for 200 employees. Furthermore, the Federal State of Lower Saxony is going to set up a service centre including tax authority, police authority and teacher training college.

The former “Am Limberg” barracks, situated at the eastern edge of the city of Osnabrück, is planned to be developed into an attractive residential area in the long term. The well-preserved building fabric and the sports facilities is already now suited for temporary uses: "Stadtsportbund”, the local umbrella organisation of local sports clubs, the police, the fire brigade, the local Order of Malta rescue dog association and a pet obedience school are intensively using the site for training purposes, as garages and logistics buildings or workshops. In addition, the City has rented a building for the local technical college. The site is gradually opened by such initial civilian uses and is becoming well-known among the citizens of Osnabrück.

Using barracks areas has also been practised successfully and in an exemplary manner when re-using 720 officers’ accommodations. Based on close cooperation between the City and the BImA, they were mainly sold by small “packages” to investors or to young families to create ownership. The accomodations were sold in various ways: While a part of them was put on the market based on a simple invitation for tenders, the other part was sold via invitation for tenders stipulating fixed prices. In that case, sale contracts were awarded according to social criteria. 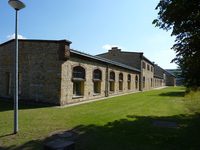 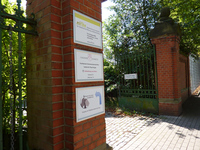 The way how to plan and early involve the public in the conversion process of 160 hectares of formerly military sites is exemplary. The citizens of Osnabrück were already intensively involved when working out the conversion perspective plan and when taking further steps. Offering initiatives and clubs to use barracks buildings and areas temporarily supported people’s identification with the conversion.

The ongoing “KonVisionen” process in Osnabrück shows that, under average conditions as well, it is possible to reoccupy various brownfield sites and vacant buildings, to integrate them in existing functional and urban planning structures thus giving fresh impetus to their development. In doing so, it is important to communicate the challenges offered by the whole city as a potential instead of decay to citizens.

Record inserted on 25.05.2009 by the Federal Institute for Research on Building, Urban Affairs and Spatial Development (BBSR) within the Federal Office for Building and Regional Planning (BBR).