In Regensburg, an association of several carrying companies contributes to rendering the handling of goods transports more town-friendly by optimizing deliveries to inner city business and service operations. 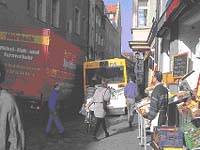 A large part of Regensburg’s (population 150.000) inner city traffic problems are attributable to goods transports, just like in many German cities. In the town centre of Regensburg this situation is most of all the result of the high business concentration in an area of only about 1 km². In addition to this, the historic old town is characterized by a system of narrow, winding lanes and streets. These not only serve as transport routes for delivery traffic, but are simultaneously also filled with tourists, shoppers and residents. The result being that a very diverse range of mobility interests converges in an extremely constricted space. 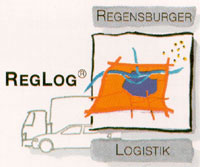 Following extensive surveys and demand analyses, the city logistics project RegLog® was established in the mid-90s on the initiative of the BMW-AG and in cooperation with science, the economy and politics. The project not only helped to significantly alleviate the use conflict as the improvement in the traffic situation ultimately also directly improved the residential quality and general quality of life in Regensburg’s inner city. A main emphasis was placed on the objective of relieving the inner city area of traffic via effective and targeted goods roll-out during deliveries, waste disposal and goods transports. Several carrying companies from the Regensburg region cooperate to achieve this. The inner city shipments of all the involved carrying companies are collected, sorted and then delivered to the town centre in a route-optimized manner. The resulting synergy effects include savings on individual truck journeys as well as in the number of vehicles used. The effect is further enhanced by transporting packaging materials from the inner city on return journeys and disposing of it in the required manner. The individual disposal journeys required previously are no longer needed. The project hence not only has a positive impact on the townscape, but also supports the environment.

The comprehensive approach of this city logistics concept goes far beyond the standard amenities offered by a pure concentration service. By expanding the concept to various services, RegLog® becomes an optimized all-inclusive package. Decisive support is provided by the willingness of the project partners to cooperate and the use of a modern telematics system. This telematics system was developed and introduced as part of a model project. It links all the RegLog® partners with the carrier und allows for full shipment tracking as well as an efficient, largely paperless handling of transport transactions. The approach simultaneously cuts traffic, reduces the environmental pressure and improves the quality of life in the inner city.

Record inserted on 01.08.2002 by Lehrstuhl für Planungstheorie und Stadtplanung, RWTH Aachen and updated by theFederal Institute for Research on Building, Urban Affairs and Spatial Development (BBSR) within the Federal Office for Building and Regional Planning (BBR)..