In the Schöneiche community near Berlin, the conservation of the natural environment is seen as a significant factor for rapid growth. Various design projects for the town or its open spaces, ecological construction and environmental education were realized with the involvement of residents and created a broad environmental awareness. The measures simultaneously promote local recreational tourism as an economic base. 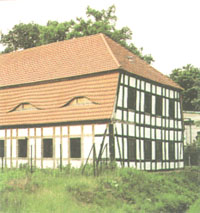 The community of Schöneiche (pop. 12.000) is located east of Berlin in the rural district of Oder-Spree and is, owing to its wealth of forest and park landscapes, also known under the epithet of “forest garden community” (Waldgartengemeinde). The settlement pressure which set in following reunification in the environs of the agglomeration Berlin was also felt in Schöneiche, apparently heralding a significant population growth. Against a background of emigration to the green belt, the preliminary preparatory land-use plan assumed the future population to be 25.000 residents. 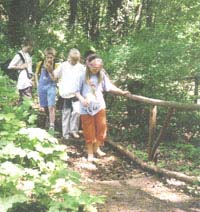 The threat posed to the „forest garden character“ by expansive settlement growth led to the 1992 resolution in favour of an ecologically oriented town development. A very conscious emphasis was put on gentle and high-quality development, instead of pure population growth, and the desired number of residents was limited to 15.000.

In order to protect the landscape from further urban sprawl, the primary developments involved building up existing residential areas within the town with new constructions. A good example is the legally binding, „ecological“ land-use plan which came into force in January 2003 for a new 6,1 ha residential area, which contains extensive specifications on the settlement ecology and is based on environment-friendly planning principles.

The traffic load is to be reduced by offering „Park & Ride“ facilities in conjunction with local public passenger transport to Berlin. Traffic abatement measures also include speed limits in the residential areas. In addition to this, the operation of an existing historic tram to Berlin-Friedrichshagen is being subsidized. The strategy is composed of many individual measures and sponsored in equal measure by associations, action groups, residents, politicians and the community administration. In keeping with sustainability principles, the town development concept includes the intentional involvement of children and adolescents. The design of the 45.000 m² green area „Kleiner Spreewaldpark“ near the town centre, for example, was performed with the involvement of schools and nursery schools and, respectively, in school holiday leisure periods. The park has meanwhile become a centre for close-to-nature environmental education for children of all ages living in the greater region of Schöneiche. At the time of writing, individual fractions within the municipal authority and associations are attempting to push through a community statute for the legally binding protection of tree populations on public and private plots.

The wood and clay „Landhof“ estate was constructed for 13 families with many children as part of a self-help project. The use of the excavated clay as a façade material, the installation of composting toilets and the construction of reed bed sewage plants are some of the special features here. The construction of three day-care centres was also performed in an ecological wood and clay architecture. The newly constructed fire station was equipped with geothermal heating and a landscaped roof. The „Jägerpark“ was developed in compliance with the parks and green areas statute. This was done using the award-money from the „TAT-Orte“ competition. The concept for preserving the „Schlosspark“ is gradually being realized.
Schöneiche was awarded the “TAT-Orte” predicate by the federal environmental foundation “Bundesstiftung Umwelt” and the German Institute for Urban Studies in 1997 and 2000 for the “ecologically oriented town development facilitated by an exemplary consultation and cooperation process between the municipal authorities and a great number of local stakeholders”.

Probably the most unusual aspect of this project is the fact that a community had the courage to deviate from the prevalent growth philosophy and instead consistently enhanced endogenous potentials, and in doing so also recognized an economic perspective for itself. All the stakeholders contribute to the sustainable development of the community via independent initiatives, community activities and various forms of cooperation.

Record inserted on 01.06.2003 by Lehrstuhl für Planungstheorie und Stadtplanung, RWTH Aachen and updated by theFederal Institute for Research on Building, Urban Affairs and Spatial Development (BBSR) within the Federal Office for Building and Regional Planning (BBR).