The framework plan in Schwedt contains the deconstruction of the entire housing estate area "Am Waldrand" through large-scale demolition. After disconnection and deconstruction of the supply networks and clearing of the areas, these are first renaturised with a grass mixture and later forested.

The demolition work in the 'Am Waldrand' housing estate area in Schwedt will be carried out in several stages through to 2008. With the end of the residential usage, the supply networks for all utilities (electricity, gas, central heating supply, water/waste water, rain water, street lighting, TV/telephone) are disconnected. Some of the supply lines are laid into a collector, a concreted channeling system with inspection chamber. The complete deconstruction of the technical supply systems is very expensive in its entirety. It has so far been possible to deconstruct 700m of collector channeling.

The cleared areas are first 'renaturised', i.e. a robust grass mixture is sown on the site. The seeding is financed by the deconstruction part of the Urban Restructuring in East Germany assistance programme and takes place immediately after the demolition.

Temporary greening using a wild flower seed is planned for further selected areas in the short to medium term. This has already been successful in smaller open areas in Schwedt.

In the long term, the forestation of the north-west part of the urban district is planned as a buffer zone to the heavily used main road and to the petrochemical industry sites to the north. However, the planting of the mixed forest will not be done until around 2008, when enough large areas have been cleared. A complete deconstruction of the housing is to take place on this site. The resulting areas of around 10 hectares will be prepared for general forestation by 2008. While the footpaths will be deconstructed, which will ensure the drainage of rain water at the sides of the road, they will remain as forest footpaths in future. These breaks and footpaths will continue to provide connections to the neighbouring town areas. The basic structure of the former residential will remain visible for the walker in 2020. The use of the future forest areas is to be open to all citizens. 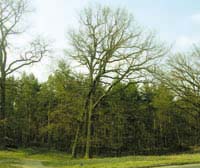 The ownership structure of the future forestation area will consciously remain unchanged. This saves any land acquisition tax and costs for necessary cadastre surveys of the areas. The planned forest areas will be entered into a city area pool in order to be able to compensate for the loss of forest areas through building measures in other city areas. It is planned that, in the long term, the city administration will take over the areas redesignated as forest areas.

Record inserted on 20.07.2007 by the Federal Institute for Research on Building, Urban Affairs and Spatial Development (BBSR) within the Federal Office for Building and Regional Planning (BBR).