For the former porcelain-manufacturing town of Selb, a considerable increase of the age group 65-80 years and especially of very old people is forecasted by 2010. The town prepares for this development by setting up and expanding a medical service and care network for the elderly. The network includes a central contact point and existing residential and ambulant institutions of the town and the region. The services offered are combined with new forms of housing and use existing vacant buildings. 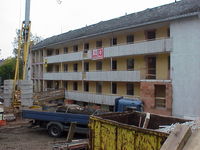 Urban development in Selb is closely related with the porcelain industry. The sales crisis of the ceramic industry in the mid-90s led to a strong decline of persons employed and to a loss of inhabitants. During the last three decades, the population decreased from 24,000 to currently about 16,500 (2008). Unemployment rate is about 12% and the ages of the inhabitants are above average. A quarter of the population is older than 65 years. By 2010, a steady increase is forecasted especially for the age group 65 to 80 years, which is why the town expects an increasing need for medical and care services for the elderly. At the same time, the loss of inhabitants has resulted in vacancies of the rented housing stock in the town. Due to the changed demand especially owing to the growing number of the elderly, the town’s strategy to tackle these problems is to formulate concepts to bring the existing housing stock in line with the expansion of social services. 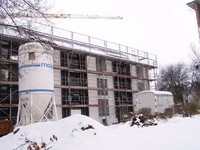 The town of Selb has developed a concept for setting up and expanding a medical service and care network for the elderly with specialised central institutions. It thus faces up to the problems caused by the change of the economic structure and the negative growth processes caused by the demographic changes. Issues in connection with the efficiency and profitability of existing facilities, with the staff situation, the cooperation among service providers and with future demand as well as problems and positive experiences were discussed and settled. The re-use of vacant buildings for groups with specific residential need played a central role within the discussions about how to optimise the elderly care situation.

An information centre, which forms the central body of the network, provides information about care for the elderly. It maintains a database of all service providers in the town and in the region, coordinates activities, networks the services offered and helps to find support. Support is provided to find even small services such as assistance for shopping, washing or cleaning the flat. In the urban districts of Vorwerk and Selb-Ost, so-called care centres were set up in connection with the planned contact point in the inner city. Professionals and volunteers work there and assist older people in need of care. This is how needy older people in less central urban districts can be individually looked after.

According to the town’s goals, the network institutions were primarily established in vacant buildings thus meeting social and urban development requirements. A first care centre could already been established in 2007 in a refurbished and altered residential building of the 50s in the district of Vorwerk. The newly created facility offers day care specialised in the field of dementia. In addition to the care centre, eight barrier-free flats were created by altering a residential building. Thanks to the intensive cooperation of the town with a charity, the measure could be easily carried out. The town government of Selb provided the architectural framework for the care centre. The Bavarian Red Cross had already presented concrete proposals for planning and organising the centre. A space allocation plan had for instance been developed considering these proposals already in the planning phase.

The medical service and care network for the elderly was a project of the town government of Selb carried out between 2002 and 2007 in the context of the research field “Urban Restructuring in the Old Federal States” funded under the German “Experimental Housing and Urban Development” research programme. 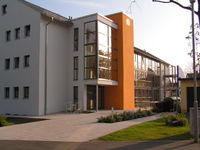 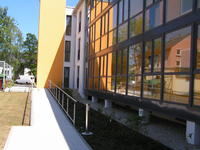 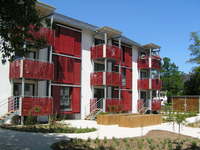 In the context of the medical service and care network for the elderly, tackling social and urban development tasks, that means finding a use for vacant buildings and establishing social services, has been intelligently combined.Intensive cooperation of the local council departments responsible for social affairs and urban planning has a considerable share in this success. The network includes a contact point and existing residential and ambulant facilities. It combines its services with new target group-specific residential offers thus optimising the supply of care services in the town and in the county while promoting housing in inner cities. New uses could be found for vacant buildings. As the network serves the whole county and involves care services of the town and the region, network relations between the town and the region are supported. The services provided by the care centre were approved right from the start and all newly created flats could be let from the beginning.

Record inserted on 14.12.2009 by the Federal Institute for Research on Building, Urban Affairs and Spatial Development (BBSR) within the Federal Office for Building and Regional Planning (BBR).