In Wuppertal's inner city district of Elberfelder Nordstadt the redevelopment is initiated and supported with commitment from the residents. In a creative participation process with art and cultural campaigns and joint festivals, various age and resident groups have become active in the urban neighbourhood. In this way, solutions have been found for the centrally located, old-fashioned Schusterplatz, which sustainably turn the square into a meeting place for young and old. 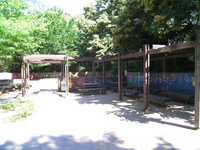 The "Wohnquartier Ölberg" (Ölberg estate), as it is known to the residents, is characterised by a large and varied population. Older residents live here next to students, third-generation companies next to small new companies. The urban image is characterised by the Wilheminian housing with will small shops, artists' studios and bars.

Schusterplatz, which was developed in the 1970s as a children's play area, is the central square in the Ölberg district. Its design has not suited the changed use requirements of the residents for some time. The intensive use of the square during breaks and for lunchtime supervision by the adjacent schools led to elderly people being displaced. Therefore, solutions were sought for a redevelopment of the square with a participation and planning process which involved all age and user groups.

Since 2001, an office for organisational and corporate consultancy has been working voluntarily on urban development in the neighbourhood and has initiated and guided the redevelopment process for Schusterplatz.

The urban district is one of the Stadtumbau West programme areas, which require considerable work as a result of demographic changes in inner city, Wilhelminian neighbourhoods. A small-scale structural development should be realised here, in which all the participants work together.

The project was funded and evaluated between 2006 and 2007 as a model plan in the research project "Innovationen für familien- und altengerechte Stadtquartiere" (Innovations for urban squares suitable for families and elderly people) in the federal research programme "Experimenteller Wohnungs- und Städtebau" (Experimental Residential and Urban Development) - ExWoSt. 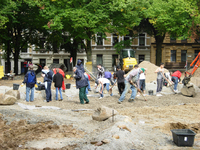 "Platz für alle! Mitmischen + Mitgestalten" (Space for all! Join in with the design)

Under this slogan, Schusterplatz was redesigned with intensive resident input. With neighbourhood parties, art and modelling campaigns, a planning café in the Seniorenstift nursing home, with visits and joint events in the migrant institutions and with the "World-Café" on the square, all age and user groups were addressed and ideas for the future use and design collected. A former greengrocer's on the square served as a permanent contact office with daily opening hours. An Internet site encourages "involvement" and communicates the results.

Various landscaped, architectural designs were developed from the residents' ideas. All designs had to make the square accessible and usable to all. Previously it had only been accessible via steps. The residents considered the "Kurpark" design as particularly suitable for multigenerational and flexible use. The design envisages a large area on the northern side of the square with paving under the existing trees, forming a type of hall, as a joint meeting place and area for festivals. Possibilities for play and movement for smaller and larger children are available on the terraced sand play area. A lawn area is suitable for sunbathing and for small ball games. Seating with benches close to the Seniorenstift is available for parents and older people on the adjacent area, from where the activities on the square can be observed.

During the three-month construction phase, numerous actively involved residents followed and commented on the work on the square. Play houses, which were installed on the square, were created in the adjacent school workshop in a "Join-in site" with youths under the instruction of a local joiner. School classes also worked on a concrete and pebble fret, also under the instruction of an artist, which breaks up the sandy area.

Through support from numerous sponsors, an intercultural programme accompanied the redevelopment of the square under the motto of "Gerüch(t)e Küche" (rumour kitchen). The permanent exhibition "Mahlzeit" (meal time), in which kitchen tables were decorated and dressed in empty shops according to origins, tradition and taste, ended with a large banquet to celebrate the opening of the redevelopment Schusterplatz.

In order to be able to create a square for all generations, neighbourhood stakeholders are also still looking for new partnerships and financing possibilities. In future, a lavatory with storage possibilities, e.g. for festival and play materials, is to be realised in a former transformer station on the square. This project has been taken in hand by a local craftsman and the development completed with sponsoring.

The agenda of the Schusterplatz café, a project group of the Stadtteil-Fördervereins (district support group), now includes the question as to how further ideas can be organised and financed independently on the square. The organisation of the lavatory use and the storage space, the cleaning and care, the settlement of consumption costs for electricity and water, registering events on Schusterplatz and possibilities for enriching Schusterplatz with gastronomy. 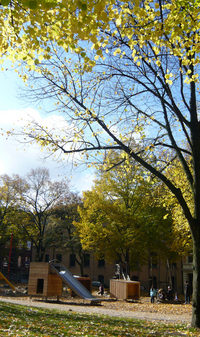 With the redevelopment of Schusterplatz, a public space has been created which is fit for all generations. To achieve this, residents and companies from the urban district have made equal contributions and have initiated and organised the redevelopment process together.

Through an innovative participation process, which goes beyond the traditional participation forms, the independent commitment of the residents, and their responsibility for the neighbourhood, was promoted.

The adoption of the square by the residents is not ended with the completion of the planning and the construction measures. They will discover the square more intensively in future than before as a common living space and crystallisation point for meetings.

Record inserted on 06.01.2009 by the Federal Institute for Research on Building, Urban Affairs and Spatial Development (BBSR) within the Federal Office for Building and Regional Planning (BBR).